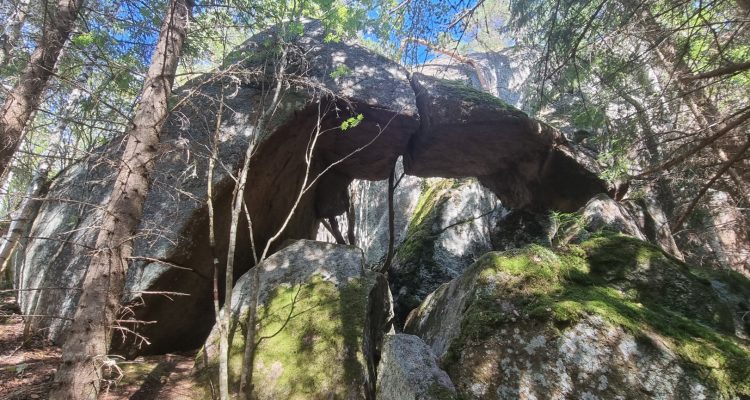 There are a lot of weird and wonderful nature destinations in Finland. These nature sights include peculiar rock formations, caves and giant’s kettles that remarkable forces of nature have carved. In fact, many mysterious nature sights have been puzzling people’s minds for centuries. Some of these strangest nature sights have been here since the last Ice Age. When something is too difficult for the mind to comprehend, stories of elves, goblins, giants, and demons are born. And oh boy, do these places have many stories to tell!

Melting waters of the last Ice Age created this womb-like cave. Rushing water carved a unique vertical giant’s cauldron into the granite. As a result of this erosion, it’s possible this place has been worshiped precisely due to its Mother Earth-shape. Read more: Högberget erosion cave takes you the Mother of Earth

The Giant’s Kettle Park of Askola is a well-known nature sight in Southern Finland. Giant’s kettles or giant’s cauldrons are called hiidenkirnu in Finnish (hiisi = a troll or a giant, kirnu = butter churn). This is because ancient Finns thought that magical beings in the forest would drill these holes into the hills when humans weren’t watching. The Askola giant’s kettle park has 20 kettles and has the most butter churns in one place in Finland. Read more: Magic of the giant’s kettles in Askola

4. The silent people of Suomussalmi

This extraordinary artwork called Silent People (Hiljainen kansa in Finnish) is located the middle of nowhere, at Suomussalmi in Kainuu region of Northern Ostrobothnia. Why are they standing there? What is their story? Read more: The Silent People of Suomussalmi to see why it deserves to be on our list of top 10 strangest nature sights in Finland.

Taatsi seida, or Taatsin seita in Finnish, by Taatsi lake is an ancient Sámi culture site where the local Sámi people brought offerings to the gods. It is located in Pokka village between Kittilä and Inari. The seida is about 10m high rock structure rising from a lake, and it was believed that a spirit or an elf lived in it. Read more: Sami sacret site Taatsi seida is a magical place

Giant’s sarcophagus, jättiläisen hauta, is a large retangle boulder in Tammela in Tavastia Proper region in Finland. It lies hidden in the forest, and by the looks of it, it could really be a coffin for someone fairly large. If you knock on the side of the boulder, it eerily sounds like it’s hollow. What is the story of this Iron Age giant’s sarcophagus? Read more: Odd giant’s sarcophagus in Tammela was a sacrificial altar

We once noticed a little star on the map with a text “Hell of Lapland”, and we knew we have to go and check it out. Hell of Lapland turned out to be a saivo lake called Pakasaivo in Muonio. Pakasaivo lake is very deep and the steep cliff walls surrounding the lake reach up to 60m above water. The strangest thing about these saivo lakes is their mythology. People used to believe that saivo lakes have two bottoms and that on the other side of the lake was another world where souls live. Are you fascinated by the Finnish mythology? Read more: Pakasaivo, the Hell of Lapland

The devil’s gate near the Putelo croft estate at Rantasalmi may not be a well-known nature destination in Finland. However, it definitely deserves to be on our list of the strangest nature sights in Finland. It’s an enormous rock bridge standing about 6m wide and 3-5m in height. It may be the largest natural rock arch formation in Finland. Does this rock arch lead to another realm? Read more: Devil’s gate at Putelo leads to another world

Imagine reading a message that someone wrote 5 000 years ago. Well, there is no need to imagine it. The rock paintings at Astuvansalmi in the Finnish Lakeland are direct messages from our ancestors in the past. The stunningly vivid images that cover dozens of motifs are included in the largest in Northern Europe. Read more: Finest rock art in Finland at Astuvansalmi

How many of these strangest nature sights in Finland have you visited? What would you add to our list? Comment below!