Home>Season>Autumn>Magic of the giant’s kettles in Askola 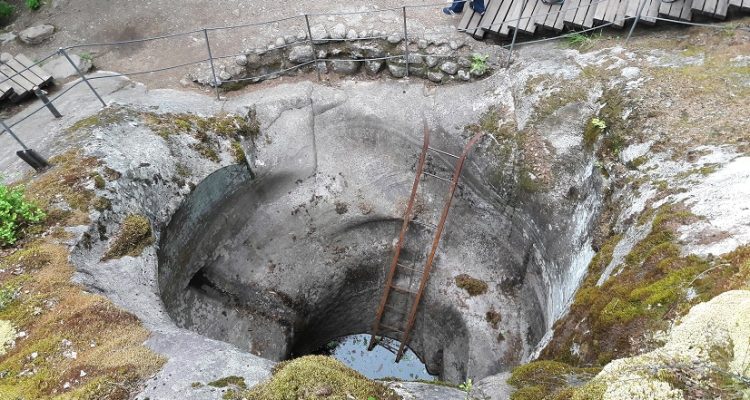 A lot of people will know the story about Jack and the Beanstalk. When the seeds grow into a stalk, Jack climbs up and ends up in the house of the giant. In some versions, Jack is hidden in the giant’s kettle but the giant smells him in his house. This story really comes to your head when you visit a park full of giant’s kettles of all sizes in Askola. You can almost see the giants hiding next to the nearby lake, just waiting for all us humans to go home so that he can cook up their next meal in one of the cauldrons scattered in the hillside.

The Giant’s Kettle Park of Askola is a well-known curiosity in Southern Finland. Google recognises it and the entrance to the carpark nearby is marked with a proper sign. I have visited the place several times, and each time it has something new to offer.

There is an information board next to the carpark that tells visitors of how some of the giant’s kettles were formed. The main path starts from here and leads visitors past a rock troll, a huge erratic boulder that looks like it has eyes and a gaping mouth with teeth. From here, there are two paths to the cauldrons: a “scenic” route to the right that is slightly longer and takes you to the edge of the cliffs overlooking the forest, and the Porvoo river and estuary, and the more direct route down the hill. The scenic route adds only about 500m to your trip so I always choose that one.

The holes carved into the hillside start appearing as soon as you make it to the wooden steps and through a ceremonial gate. The hillside is quite corroded due to all the visitors in the area so make sure you don’t cause further damage and stay on the paths or the steps. The top of the hill has smaller kettles, and some of them still have the churning rock that caused the kettle to be formed on the bottom of it!

Some of the largest kettles can be found at the bottom of the hill. The Rushing One (Kohiseva) is one of the longest, and it looks like a whitewater rapid with several shallow kettles on its surface. The largest and deepest kettle is the Giant’s Bath Tub (Jättiläisen kuhnepytty), which is 4,2m wide and 10,3m deep (13.7ft by 33.8ft). An old, bendy ladder has been put into the kettle, presumably so that it can be emptied and/or that someone silly enough to fall in can get out. You can really see the different colours and layers of rock that the icy water and a churning rock have eaten through, where they have stopped, and how long it must have taken to create these deep shafts.

Last time I visited, my friend and I ended up rescuing a frog from one of the deeper kettles with a stick: the kettle was so deep and steep that the poor froggie couldn’t jump out. After 20mins of hard work, the exhausted frog decided to sit still on the tree branch while we slowly pulled it out of the depths of the cauldron. Only after the frog had hopped away did we realise that if we only had kissed it, it could have turned into a prince!

Mystery of the kettles

Giant’s kettles or giant’s cauldrons are called hiidenkirnu in Finnish (hiisi = a troll or a giant, kirnu = (butter) churn) because ancient Finns thought that magical beings in the forest would drill these holes into the hills when humans weren’t watching. Many such places became holy sites, or at least they were respected until the arrival of Christianity, which meant that many ancient holy places were deemed “of the devil” and abandoned.

The kettles were formed during the Ice Age when the bedrock was covered with ice. Melting water on top of the glacier formed little streams, which flowed down onto the bedrock, taking with them smaller rocks and debris. In some cases, some of these rocks got stuck on the surface of the bedrock, into a crevasse or something similar, so the flowing water together with the churning rock slowly eroded away the bedrock.

The Askola giant’s kettle park has 20 kettles and has the most “butter churns” in one place in Finland. The kettles have very descriptive names like The Slip (Luiskahdus), The Pear (Päärynä), and The Giant’s Bath Tub (Jättiläisen kuhnepytty).

Address: Type Hiidenkirnujentie 721, Askola on your navigator. It will take you to the car park area nearest to the start of the path.

How to get there: You can get to the giant’s kettle park in Askola by car, by public transport or by bicycle.

Accessibility: The park is not accessible to people with limited mobility or to any wheeled vehicles such as children’s buggies or wheelchairs. The paths leading to the giant’s kettles are well-trodden but go over some rocks and tree roots. There are steps and platforms made from wood to help people safely walk in the park as well as ropes you can hold on to when going up and down.

When to go: You can visit the area at any time of the year but the best time is when the kettles are not frozen, i.e. from May until mid-November. You can visit the park during snowy or wintery seasons but make sure you are careful because there is no winter upkeep (no snow removal) and a lot of the more tricky areas can be hidden by snow. You don’t want to fall and injure yourself (or worse). Also note that there are no lights in the area so make sure you visit the area when there is enough light.

What to wear: Mosquito repellent in the summer – mosquitoes love this area because they have access to stagnant water and have a fresh supply of lovely human meals several times a day. Because the hills can be slippery, hiking shoes are good but normal sneakers will suffice as long as they have a good grip on them.

Special to remember: There are no facilities in the area, just a carpark. Making a fire is absolutely forbidden because the area is protected by law.

Entrance fees: You can leave the entrance fee to the park in a black iron kettle just next to the steps in the park entrance (cash only!). The recommended fees are: 4 € / family or 2 € / adult and 1 € / child or 10 € / school group. The donations help keep up the park.

While you are in the area, stop by Porvoo. You can read more about it from our blog at Ekudden nature trail in Porvoo.