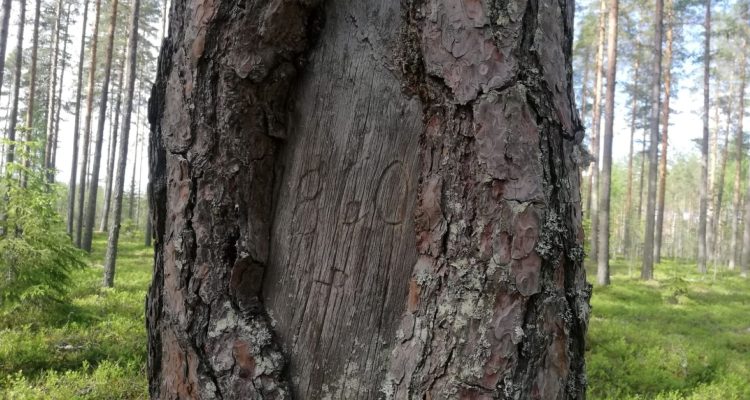 The pruned forest of Pyhäkangas and corpse road, Pyhäkankaan karsikko ja ruumistie, is a curiosity worth visiting at Saarijärvi in the Central Finland region. There are pruned forests in Finland that are dedicated to dead people, and there are many fascinating stories connected to them. Recently, I have been into family tree research, so old trees with ancient carvings caught my attention. I couldn’t visit this location by myself, but my mom went there while in Saarijärvi and told me all about it. This particular pruned forest in Pyhäkangas was said to be haunted, and she got to experience that by first hand!

Karsikko is a traditional Finnish way of making entries of the deceased to trees, or in some cases in rocks or walls of buildings. Usually the tree branches and some bark was removed and carving was made in the inside layer of the living tree, often with the deceased’s initials, name, or sign, and dates of birth and death. Often pine trees were pruned between villages and cemetery. People would transfer the dead to the cemetery and then prune a memorial tree for them, believing that it would prevent the dead from returning back home. Their souls were supposed to notice the carving on the trees and realize they were dead, and turn back to the cemetery. Similarly like the purpose of the coffins was originally to affect the souls of the dead in such a way that they would not come to haunt the air.

There are many locations in Finland with name karsikko in them, for example Karsikkosaari, Karsikkoniemi, Karsikkokumpu, Karsikkomäki, Karsikkosuo, and Karsikkovaara. There is a pretty good chance that the name originates from this pruning tradition. These locations are in multiple municipalities, but for some reason mainly in Kainuu region and Eastern Finland. The origin of this peculiar tradition is unknown, but I would guess this has come to Finland from Russia since there are no evidence of pruned forests in Western Finland where Sweden’s influence is stronger.

The pruned forest and corpse road in Pyhäkangas originate in the early 17th century when people from Pyyrinlahti, Laajaranta and Riihilahti travelled to a church in Saarijärvi. That church had been established with name Palvasalmi in 1628, even before Saarijärvi became known as Saarijärvi in 1690. When the church ruled that bodies should be buried in the holy land, they had to be transported to the cemeterary from all villages. The distance was easily over 15 kilometers and the bodies were transported by carrying or by horse carriages or sleigh. This hill was a natural resting spot at approximately half way of the journey. Pruning began sometime after 1690 and before 1740 when a new road was made in the area. The first written documents about Pyhäkankaan karsikko have been made in 1903 by Albert Hämäläinen.

According to folklore there has been over 200 pruned trees in the forest. It has been protected since 1904 by the initiative by Karl Branderin. When he started to work as a forester in Pyhäkangas, he counted 30-40 pruned trees. The forest had been sold and the trees were supposed to be cut down and transported to a saw mill, but he explained to the buyer what was on the trees. The deal was cancelled by an understanding buyer and the pruned forest was saved. Now there are only few dozens of trees left, but Pyhäkangas is still one the best preserved pruned forests in Finland. The markings on the trees are dated between 1833 and 1897. To put it into perspective, my grandparents weren’t even born then. How much do you know about your grandparents parents or their parents?

The Pyhäjärvi pruned forest has been researched by many people, but not much is known about the deceased the trees are dedicated to. My mom said it was fascinating to walk along the corpse road and try to read the carvings on the trees. There was same kind of quiet and respectful feeling as in cemeteries. Many of the trees had fallen down, but all of them have been documented. One tree has a year 1860 and initials HP (see the first image of this post). The only person that fits into that description in the church books of Saarijärvi is Heikki Niilonpoika from Pyyrinlahti. He passed away on 22 July in 1860 and was buried in Saarijärvi. Locals also tell a story about Mikko Iivanainen from Pyyrinlahti. He apparently fell asleep on his horse’s sleigh and hit his head on a tree in 1861. What could be his memorial tree, has a year 1861 carved in it.

What about the ghosts then, you might wonder. Are they haunting in the forest, still waiting for resurrection? My mom took a lot of pictures when visiting the pruned forests of Pyhäkangas. One of the pictures happened to be Heikki Niilonpoika’s tree. It was only after she came back home when we noticed, that she also had a video in her phone. The video was shaky at first but then zoomed in to the markings on the tree. I got chills.

Car: Pyhäkangas is located only about 5,2 kilometers off from highway 4 / E75. Use address Häkkiläntie 1475. Please note that there are several Häkkiläntie roads in Finland, select the one in Saarijärvi in your navigator. You can park your car on either end of the corpse road and walk to the area. Karsikko is marked green in the map below.
Bicycle: We would recommend avoiding highway 4 when cycling.
Public transport: You can get to Saarijärvi from Jyväskylä by bus, but I couldn’t find any bus connection to the pruned forest. It’s located about 30 km from the centre of Saarijärvi.

Accessibility: The corpse road is accessible, but the pruned forest is located on a hill.

Facilities: There are no facilities in the area.

When to go: We recommend visiting this place in summer, or at least when there is no snow on the ground.

What to wear: The short walk from the road doesn’t require any special equipment.

Special to know: Remember that this is protected area, so please treat it accordingly. Do not make any fire!

Pyhä-Häkki National Park is located close by. Read more about all national parks in Finland.