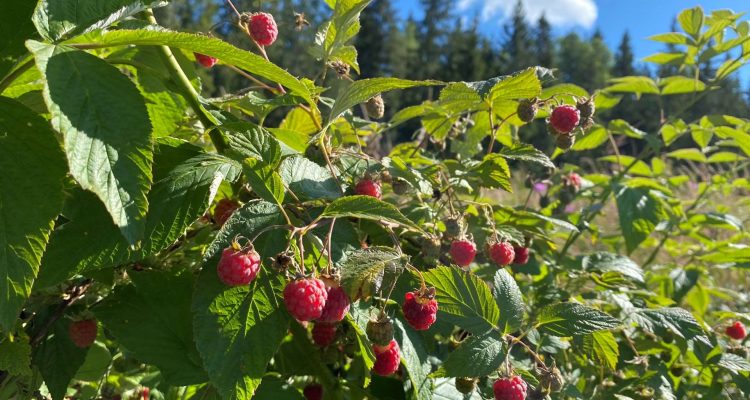 Wild raspberries start to ripe in Finland at the end of July, which is also the best time to pick them. The season lasts until September, but in my experience, raspberries are more difficult to pick at the end of the season as the ripe berries fall from the bush. They might also dry if there isn’t enough rain, and they get more worms later on. So go check out the best raspberry locations now!

The raspberries are best when eaten fresh, but they can be dried or frozen for later use. Raspberry makes excellent juice, and jam, which is my favorite pancake topping. By the way, have you noticed that many raspberry juices that you buy from grocery store might include apples or grapes? This is because they are cheaper and added to increase the quantity of the product.

Differences between wild and cultivated raspberries

Wild raspberries differ from cultivated berries by their size and taste. In the wild, raspberry bushes may need to survive through periods of low rainfall and the berries are usually smaller than cultivated raspberries. Cultivated raspberries taste much sweeter. Some prefer the sweeter berries, but personally I love the wild berries more. To protect the fruits from predators, wild raspberry bushes have more thorns and are more difficult to pick. But maybe it’s the effort that makes them taste so good.

Raspberries are rich with fibers, minerals and vitamins

Raspberry is one of the most fibrous wild berries in Finland. Raspberry is rich in minerals and trace elements such as magnesium and manganese. Berries also provide vitamins C, K, E, A, and B. In fact, two deciliters of raspberries contain the same amount of vitamin C as one mandarin. But you cannot find mandarins in the Finnish forests!

Where to find them?

Raspberries are found for example in open areas where trees have been cut few years earlier. I like to mark my phone’s map app (Karttaselain, not sponsored) with potential raspberry locations whenever I notice clean-felled areas throughout the year, and in July I will check out if they have raspberry bushes. Raspberry bushes will start producing berries only from the second year onwards, so there is no need to go to the newest clean-felled areas right away. Raspberry bushes have white flowers that bloom in June, and about a month from the bloom the berries will ripe.

Raspberries are easy to pick because they grow pretty high from the ground so you don’t hurt your back when picking the berries. You pick them by hand, unlike blueberries or lingonberries. But usually, the areas where they grow have really uneven ground with stumps and ditches, so it is tricky to move around. Last summer was excellent season for all berries, and I really focused on raspberries because I like them so much. There is no need to wash the berries you pick from the nature; they can be eaten just like that.

Read also our other posts about wild berries in Finland:

If you’ve found this article about wild raspberries interesting, please share it and click the picture below to Pin It!