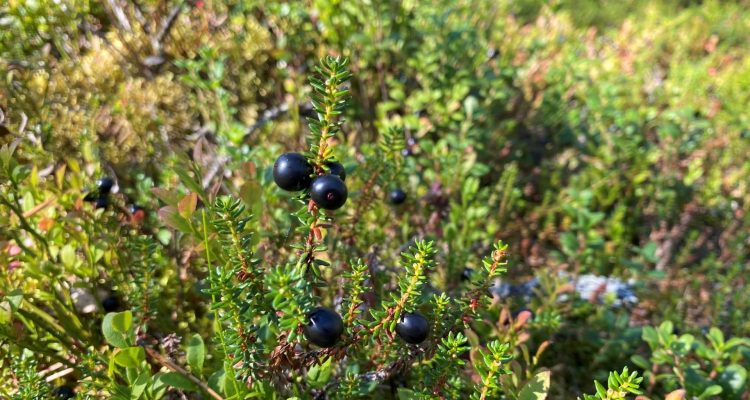 Crowberry, Empetrum nigrum, has been overlooked in many countries and sometimes even believed to be unedible. In Finnish the crowberry can be called variksenmarja, harakanmarja, sianmustikka, or kaarnikka. In south of the country, I grew up calling this berry variksenmarja. It means the same as crowberry, kråkbär, or Krähenbeere, and we never foraged it for food. However, the berry is as prolific as our beloved bilberry.

It wasn’t until I started spending more time in Lapland when I realized the value of this amazing berry. In Lapland, the crowberry is known as kaarnikka, which comes from Sami word gáránas, raven. In Finnish folklore, the raven has always been considered a wise bird even though it also brought bad luck and death. Even shamans turned to ravens for answers. In northern Finland, the crowberry has always been highly valued and important berry. They are slightly different species in the north than in the south.

My initial contact with crowberry in Lapland was in the form of juice. To me, crowberry is actually much better in juice or jam rather than eaten fresh. At the old days, when there was no sugar in use, people didn’t make juices or jams out of wild berries, but still preserved them. The berries were stored frozen, and added to soups and stews, or mixed with milk for dessert. People knew they were healthy and utilized them to treat fever or cold.

Crowberry is even healthier than blueberry

According to the Finnish institute for health and welfare, the crowberry is rich in vitamin C, it contains 9 mg/100 g, which is much more than what forest blueberry (bilberry) has. It also contains triple the amount of fibre than bilberry or lingonberry. There hasn’t been a lot of research conducted on the crowberry, but a Finnish researcher team has found out that it prevents Bacillus -bacteria from growing (and causing food poisoning), and another team from Norway listed crowberry as the second most antioxidant berry after rose hip, before bilberries, lingonberries, and cloudberries. So, if you are looking for superfood, crowberry it is.

We make crowberry juice without boiling the berries with tartaric acid, to take full advantage of its health benefits. We pour hot water over the crushed berries, let it cool, mix it with tartaric acid, and let it sit for few days before straining it. I also like to mix it with more acidic berries like lingonberries. We add some sugar before bottling, but I don’t like the juice to be overly sweet. The juice is then stored frozen, and this goodness carries me through cold and dark winter.