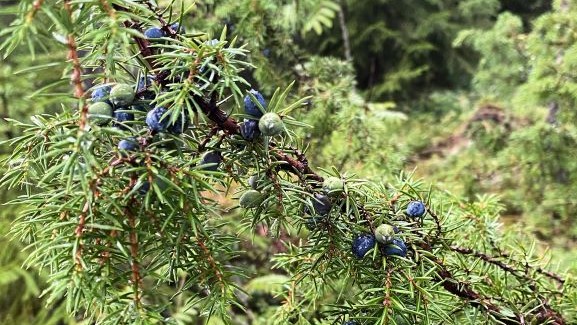 Foraging wild herbs is a forgotten skill, which is now very much in trend in Finland. Many restaurants use wild herbs in their dishes and consumers are starting to value the health, taste and quality aspects of the organic and local food that nature has to offer. Wild herbs have traditionally been used in Finland also for medicinal purposes or folk magic.

The folk medicine tradition in Finland is exceptionally rich, mainly based on sauna, massages, cupping, bone settling, and medicinal wild herbs. Elias Lönnrot was the first one to collect information about the Finnish healing methods and traditional medicinal plants. He gathered information about plants and published it under the title Flora Fennica in 1860. The nutritional and medicinal values of wild plants, berries, and mushrooms are a much researched subject of interest still today.

Folk magic refers to other than medicinal beliefs that people had about the power of plants. For example, people believed that by putting nettle tea in bath water or floor washing water, it removed any bad spells. Scattering nettle leaves inside or outside the home was another way to remove all negativity and drive the evil spirits away. Good luck was created by burying dandelions in the northwest corner of the yard. The scent of juniper was once believed to protect, heal and cleanse everything around.

I’m not by any means an expert in using wild herbs but there are few common ones, that even I have tried:

One of the easiest and most versatile ingredient growing wild in the Finnish nature is the stinging nettle. The stinging nettle is known as nature’s own spinach due to protein and fibres it includes. It has a variety of nutrients such as vitamins, minerals, fatty acids, amino acids, and polyphenols, many of which also act as antioxidants. It is especially rich in calcium, which is useful for a vegetarian diet. Stinging nettle might lower blood pressure, raise blood antioxidant levels, and reduce inflammation. It has been used to remove mucus. Nettle has also been thought to have curative effects on prostate enlargement as it increases the need to urinate.

The best time to gather young leaves of the nettle is spring or early summer, before flowering. Be careful when handling fresh stinging nettle leaves, as their hair-like barbs can harm your skin and cause painful rashes. I wear gloves when collecting the nettles. I remove the stems and blanche them and then use them in cooking, or dry the leaves to powder for later use.

The stinging nettle make an excellent addition to pancakes, which are kids’ favourites. Other common ways to use the nettle are in sauces, stews, soups, pies, or breads. Dried nettle powder works extremely well in green smoothies. Is there anything better than foraging your own smoothie ingredients from the nature?

Please note that nettle is not suitable for pregnant women, under one-year-old babies, or those, who are allergic to histamine or have kidney problems. Nettle might also absorb toxins from the soil, and excessive use can be problematic with diabetes or antihypertensive medication. Nettles should be collected far away from yards and fields as they also absorb nitrate from the soil. Some nitrates can convert to nitrosamines in our bodies, and they can cause cancer. The nitrate levels in nettles can be reduced by blanching.

Many people think dandelion is a weed, which is not welcome in a garden or yard. But dandelion is, in fact, rich in carotene, which is beneficial to health, as well as vitamins B, C and D. Dandelion leaves contain about three times the amount of nutrients compared to other lettuce plants. Another good thing is, that it contains less nitrates than regular lettuce. According to some studies, dandelion also has a curative effect on various inflammations and it lowers blood pressure and blood sugar levels. Dandelion has been known also as Herba Urinaria.

Young dandelion leaves from early summer, and preferable from shadowy place, are typically used in salads, but dried dandelion root has also been used as a coffee substitute. Even flowers and buds could be used blanched, but Dandelion has some bitterness, which limits the use. Dandelion is common in many grass areas, but I would recommend to avoid foraging the leaves from parks or pathways, where animals such as Doggy Urinaria might wonder.

Juniper berries are believed to increase the secretion of urine, sweat, stomach and intestinal fluids, and lower blood pressure. It can potentially increase the secretion of glands in the bronchi, trigger various cramps, reduce flatulence, treat wounds, and reduce the growth of bacteria, viruses, and molds. Juniper has also been found to have invigorating effects. It potentially lowers blood sugar levels, increases superficial blood circulation, and may also relieve rheumatism problems. A person with with kidney problems should not use juniper.

From juniper second-year-old berries are typically used dried, and young shoots are good fresh for herbal teas, or dried as a spice. I like to use 5-10 dried juniper berries in a venison stew, and juniper branches are good when smoking fish. Remember, that everyman’s rights only allow berry picking, they don’t allow collecting branches from trees and you always need landowner’s permission for that.

Delicate heather flowers have been traditionally used as an herbal tea to try to treat insomnia and reduce the number of bacteria and viruses. Heather may also relieve rheumatism, urinary stones and digestion. Heather flowers bloom in August.

Mixing some heather flowers with wild raspberry leaves makes a tasty evening tea, which can help for example during period pain. A good rule of thumb for the use of wild raspberries is, that the leaves are best during the first year of growth, and berries can be picked on the second year from the same location.

Goutweed is a ground elder, which was formerly used to treat gout. It’s very common and even invasive plant found in gardens and side of forest roads, fields, and streams. Many people treat it as a weed in their gardens and it’s not easy to get rid of.

Goutweed is one of the first wild herbs that can be foraged in spring. Goutweed’s young leaves can be used for salads and soups in spring from April to May. It can also be frozen or dried. The leaves contain iron and vitamin C. The plant blooms in Finland from June to August, and it’s not recommended to be used in salads mid or late summer as it takes on a tangy taste and has a laxative effect.

Goutweed should not be mix with Aethusa cynapium, Conium maculatum, and Cicuta virosa, which are all very poisonous. Goutweed remsembles most Angelica sylvestris, which is harmless. Best way to identify goutweed is to follow it during the first year until it blooms, and forage the young leaves on the next year when the plant has been previously identified.

Moments before the leaves start growing, birch trees provide birch sap, which moves inside the tree. It’s clear liquid that can be consumed fresh from the tree. If you are ever in any Finnish survival show in the spring, remember that the birch is like a coconut during about one month a year. Birch sap collection is done by drilling a hole into the tree trunk and leading the sap into a container by some tube.

Birch effectively removes excess fluid and swelling from the body and it is therefore well suited for those with unnecessarily high blood pressure. Birch has also been used for kidney and urinary infections and for the treatment of gout and rheumatism. Birch also contains an essential oil that prevents inflammation, and buds in particular are stronger than leaves but the resin they contain can irritate the kidneys.

Birch sugar, also known as xylitol, is made from birch and used in many candies in Finland. Xylitol and Stevia are both low GI natural sugar substitutes, low in calories. Xylitol, unlike Stevia, has proven health benefits, thus making it far superior to all other natural sugar alternatives. It’s especially good for your teeth. Xylitol is, however, extremely dangerous for dogs, so never allow pets to eat any xylitol candy or chewing gum.

Small newly opened birch leaves in spring are edible and can be used in herbal teas, salads, sandwiches, or soups, sauces and stews similar to any fresh herbs. The birch leaves contain plenty of vitamin C. Due to the herbal effect, you should consume birch only in moderation. People with low blood pressure and diabetics should be careful with birch.

Externally birch leaves are used in the sauna to whip yourself to improve blood circulation and stimulate the skin. The aroma of the wet birch leaves is part of the Finnish sauna experience. Birch is also good ingredient in shampoos. Remember that for collecting birch leaves or branches, you always need landowner’s permission. Damaging any plants or trees is not allowed by the otherwise generous everyman’s rights.

Have you ever tried any wild herbs? Which one do you like the most and would recommend for others to try?

Read more about food from the nature