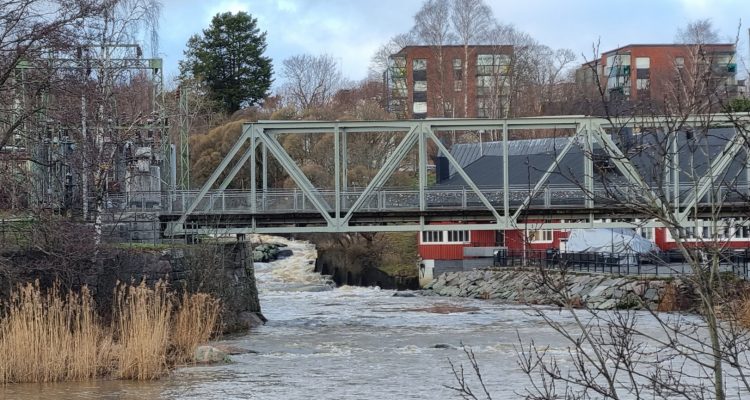 The birthplace of Helsinki city is at Vanhankaupunginkoski (meaning “Old Town rapids” in Finnish). Nowadays it’s a great place to enjoy unique urban rapids, excellent fly fishing, and promenade in this one-of-a-kind nature destination. It’s popular among all ages and easy to get to so you will see everything from dog walkers to joggers and bird-watchers to photographers there.

Even on a cold December day the Vanhankaupunginkoski area is full of people. The air was cold and crispy, so some icy slush covered the water coming down from the rapids. Still, some brave fishers were hanging on the edge of the water, hoping to catch some fish.

The rapids descend 6m in the space of 200m of rapids. The area is popular among fishers because there is a functioning fish ladder in the rapids. However, you need to have a separate fishing permit to catch fish in the stream pool (more details here).

What else is there to see?

Between the two streams sits Kuninkaankartanonsaari (Swedish: Kungsgård). Currently the Museum of Technology occupies the island. It was founded even before Helsinki itself as an estate for the king. Unfortunately, this model estate system was taken down already in the 1560s because the island became too crowded. Some buildings were moved further away towards Viikki and Latokartano in 1555. Eventually, the administration and the king’s estate were moved to Espoo in 1572.

One great option is to walk around the stream pool. Cross over Matin kaari bridge and you’ll be in a park that used to belong to an old fabric mill. The red brick facades represent the industrial era of the area in the late 1800s. Even in the winter it’s easy to enjoy the tall, mature trees. Cross over the rapids on both side of the island and sit down to sip some hot beverages while enjoying the breeze (which will be freezing in the winter – sorry!). What a great way to enjoy the urban outdoors!

History of Helsinki and its rapids

The king of Sweden (and Finland) Gustav I founded Helsinki in 1550 to compete with Tallinn for Baltic Sea trade. Vanhankaupunginkoski was originally called Helsinge fors in Swedish, meaning Helsinge rapids. The name soon eroded to Helsingfors or Helsing, which is what the capital is now called in Swedish and Finnish. King Gustav I ordered all the bourgeoisie from the towns of Rauma, Ulvila, Porvoo, and Tammisaari to move his new town. This order didn’t make them happy but what the king wanted, he got.

Eventually, the constant flooding of the rapids made life hard in the town. Per Brahe the Younger (Pietari Brahe), the General Governor of Finland in 1637–1640 and 1648–1654, moved Helsinki further south. When Helsinki was moved closer to the open sea, it began to rise. Tough years were ahead but eventually in 1812, Helsinki was made the administrative center of Finland.

When to go: Visit Vanhankaupunginkoski and its surroundings at all times of the year.

Facilities: There are restaurants and cafés in the area. There is also a 24h toilet called Helsinki huussi near the design dog park.

There are great places to enjoy the outdoors in central Helsinki. Check out Mustikkamaa island park, Vattuniemi Urban park, and the lovely Rose and Winter Gardens at Töölönlahti. Don’t forget to check out Helsinki skylines from Taivaskallio.

If you are interested in fishing, why don’t you check out the unique fishing at Lauttasaari bridge?