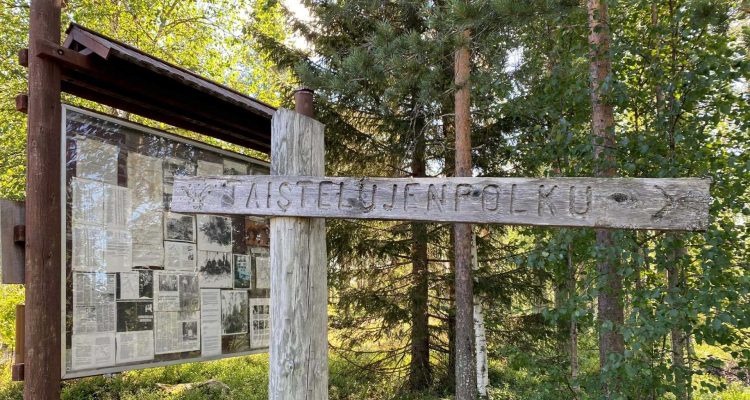 Ylimaa battle memorial and trail in Ranua highlight the history of the area. The biggest delaying battle of the Lapland War, the Battle of Ylimaa, took place here in 1944. Palovaara rest stop next to road 78 hosts the battle memorial and its trail, providing perfect opportunity to stretch your legs if you are passing by.

Ranua is best known as the arctic cloudberry town of Lapland. The municipality has a population of 3,670 and population density of 1.06 inhabitants per square kilometer. This location is unlikely to be crowded when you visit it.

During World War II, the Lapland War saw fighting between Finland and Germany in Finland’s northernmost region, Lapland. Though the Finns and the Germans had been fighting against the Soviet Union during the Continuation War in 1941–1944, the Moscow Armistice, signed on 19 September 1944, demanded Finland to break diplomatic ties with Germany and expel or disarm any German soldiers remaining in Finland after 15 September 1944. The first hostilities between the Finnish Army and the German Army took place 20 km southwest of Pudasjärvi.

The battle of Ylimaa was fought in 1944. On 7 October, the Finnish Jaeger Brigade forced the German Mountain Regiment 218 to fight. The lack of heavy weapons and exhaustion from long marches prevented the Finnish brigade from trapping the defending Germans before it received permission to withdraw on 9 October after causing substantial losses to the Finns.

Professor Ensio Seppänen designed the Ylimaa battle memorial, which was revealed in 1982.

How did the war end, you may wonder? There was never an official peace agreement signed between Finland and Germany. In 1954, the government of Finland officially noted that “the hostilities have ceased and interaction between Finland and Germany since then developed peacefully”. The casualties of the conflict were relatively limited but the German operations left Lapland devastated. Over 40 percent of Lapland’s property had been destroyed.

My Finnish Lapphund Nalle is always keen to carefully explore nature trails, despite of being unaware about the area’s history. The trail of battles, Taistelujen polku, departs from the parking lot and is easy to explore, even though it is not a circle trail. You can find several traces of the battle along the trail, including action stations.

Facilities: Outhouse toilet and picnic table next to the parking lot.

When to visit: The war memorial can be visited any time of the year. The trail won’t be kept open in winter when there is snow on the ground.