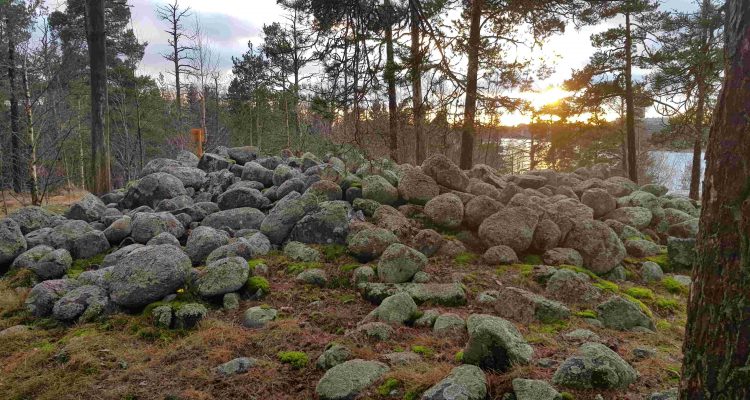 Most people recognise Lehtisaari island as one of the many islands bordering the Espoo and Helsinki archipelago in the West. What most people don’t know is that there are several Bronze Age heap tombs on the island, easily accessible while you pass through or explore the many parks and recreational areas on the same island only a few kilometres from Helsinki centre. The Lehtisaari heap tombs are a historical gem definitely worth checking out.

Lehtisaari is a proper island located in between Lauttasaari (taking you to Helsinki centre) and Kuusisaari (taking you toward western Helsinki and the calm and classical suburb of Munkkiniemi). Lehtisaari lives up to its name of “Leafy island” because it is filled with green trees of all sorts. I had passed through the island dozens of times without ever knowing that the lovely seaside atmosphere also hides an ancient secret: three Bronze Age burial mounds.

We knew that one of the tombs is located in the aptly named Hiidenkiukaanpuisto which loosely translated means “the park of the heap tomb”. My mother and I walked from Koivusaari metro station to Katajaharju and across a pretty little bridge to Kaskisaari island. There was another, longer bridge to cross before we reached Lehtisaari and the southernmost tip of the park. We decided to follow the seashore route through the park simply because the sun was shining so beautifully. Actually, we had no idea what was the best way to get to the burial mound so we decided to scout the terrain and see if we found a handy route up to it.

Right at the edge of Hiidenkiukaanpuisto park was a path taking to the right, towards the right direction. The short path took us past a few houses to Tykistökapteenintie road. Right ahead of us we saw that there was an unmarked path heading into the woods and onto some cliffs so we knew that was where we needed to go, too.

The path soon forked so we decided to walk to the left, directly up to the top of the hill where these heap tombs are usually located. The cliffs were very peculiar: at times, you could hear your footsteps echoing under your feet…. as if there were hollow caves hidden inside the softly billowing cliffs. The higher we got, the more visible the beautiful seaside vistas became all around us.

Finally, we got to the top of the hill and saw that some houses have been built on top of the cliff. Nonetheless, nestled in their midst we saw the magnificent circular burial mound with heaps of boulders stacked on top of it. There is a sign at the tomb indicating that it is a Bronze Age tomb and that it is protected by law. It is very important to remember that these are burial places: you must respect them, not walk on them, or move any boulders!

The mound itself is a wide, circular tomb approximately 10m across. In the middle of it is a 3m-sized crater inside which is (according to non-invasive research) a casket made out of large rock slabs. The heap tomb sits majestically on top of the open cliff overlooking the nearby bay area. It definitely is a peaceful place to rest in the setting sun.

While marveling at the tomb, a local woman came to chat with us and told us there are two more heap tombs in the area. She said they were more hidden, and because it was getting dark, we decided to search for them some other time; one day soon we will write an update on the Lehtisaari heap tombs. When we left, we realised that the easiest way to get to the tomb would have been to follow the Hiidenkiukaantie road there. Since we wanted to explore Lehtisaari some more, we walked down that road and made our way to Lehtisaarentie. We walked back a few hundred metres until we saw the start of a route that circles the island and went to explore the eastern side of Lehtisaari.

Many Bronze Age tombs found in the Nordics are so called heap tombs (röykkiöhauta in Finnish). They are known by many other names such as tumulus (Latin for mound), barrows, or burial mounds depending on how they were built and where. They have been known in Finnish folklore are hiidenkiuas, which means a giant’s stove. More specifically, after the knowledge of what these tombs actually contained was lost in history, superstitious Finns started to think that goblins (hiisi) lived inside these mounds. Hiisi used to mean a sacred area in old Finnish but with the expansion of Christianity, the meaning changed and became synonymous with devils and goblins.

During the Bronze Age (1500-500 BCE), seafaring connections increased and Finland adopted many traditions such as burial practices from elsewhere in Europe. Notable persons were revered by burying them in monumental heap tombs located on the top of high hills or cliffs. These burial mounds were especially used on the coastal areas. These traditions held out in Finland until the 12th century, after which the nowadays-common practice of burying people in dug graves became the norm. So, the Lehtisaari heap tombs are a part of a millennia old tradition, and should be respected as such.

Lots to do in Lehtisaari

There are plenty of activities available at Lehtisaari after you have explored the heap tombs. There is a playground for children, a sand-covered playing field, and free-to-use outdoor exercise equipment. They are all located in Hiidenkiukaanpuisto park which lies between the seashore in the West and Lehtisaarentie road at the centre of the island. There is also a sandy beach, and plenty of opportunities to spot birds but also, amazing enough, Siberian flying squirrels which call the island home!

Address:  There are several places where you can get to Lehtisaari.

How to get there: The best way to get to Lehtisaari is to use public transport and to walk the rest. There is some parking available for cars but due to the popularity of the area and the fact that it’s near housing, it is best to leave your car at home.

The heap tomb is located at the end of Hiidenkiukaantie:

Accessibility: You can get to the heap tomb either the easy, accessible way along Hiidenkiukaantie road or through the park and the forest. The area around the Lehtisaari heap tomb is flat and can be accessed by wheelchairs and children’s buggies.

Facilities: There are no special facilities at this site.

When to go: You can visit this area at any time of the year. However, if there is a lot of snow, it may be difficult to see the tomb formation itself.

Similar things to see nearby

If you are interested in the Bronze Age and similar curiosities as the Lehtisaari heap tombs, go check out Hanikka nature trail and its burial mounds in Espoo, only 16km away.