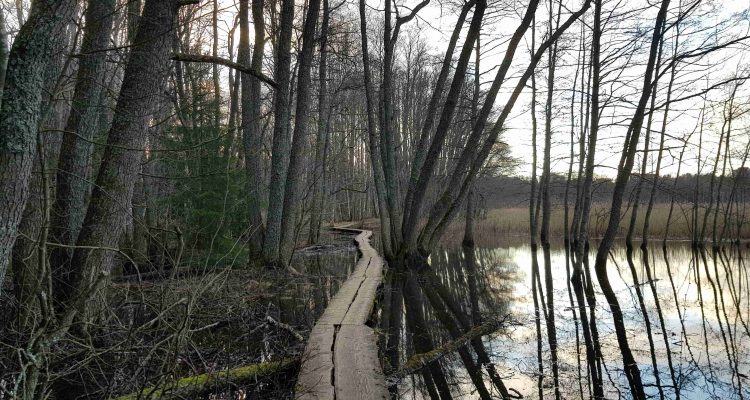 The extraordinary Hanikka nature trail runs by two narrows and one bay area in the southwestern corner of the capital area, more specifically in Soukka, Espoo. The varied trail prides itself with long, winding duckboards, alder-tree and pine-tree forests, Bronze Age burial mounds, and fantastic places for bird-watching. The 5km track is demanding at times but there is so much to enjoy that the effort is worth it. The Hanikka trail weaves on and off other sports tracks and roads, but by following trail markers (mostly yellow dots on trees), it’s easy to stay on course.

The best way to follow a handy map made by Espoo Environment Department. I’ve written this post in three sections and you can jump right into the sections: 1) rough hills and ancient shorelines (stops 1-4), 2) Bronze Age, views, and forest greenery (stops 5-8), and 3) seaside archipelago and duckboards (stops 9-13).

After downloading the map, we decided we would go start from stop n.14 and walk counter-clockwise around the trail (simply because our bus stop was closest to n.14). We walked down Soukanväylä road until we reached an underpass: a local man told us that it was the start, and also the finish, of the circular Hanikka trail. There were no trail markers but you could clearly see a path leading up the hills immediately after the underpass.

The gray smooth cliffs were slightly slippery after several storms, which had recently passed over southern Finland. The trail is marked with yellow dots marked on trees but sometimes they were rather difficult to spot so we had to stop periodically to find the next trail marker. Still, hunting for yellow dots was great fun in the bright sunlight and, if we had had any kids with us, dot-spotting could have been a good way to include them.

The first four stops from 1-4 (if you start at number 14, there are five stops) of Hanikka include the most hiking up and down hills, some swampy areas, and a huge glacial erratic. The length of this part of the track is about 1.5km.

The first part of the track from n.14 to n.1 consisted of hiking high up greay cliffs with green pine trees until it finally, slowly descended downwards.

Some areas of the descent were admittedly quite steep and slippery but we finally reached the official stop, n.1 on the map: the ancient Litorina Sea shoreline, where the high cliffs of Soukka and Hanikka could have been seen as islands approximately 3500 years ago. We walked on the official gravel road backwards for (literally) a minute, after which we saw duckboards start off from the right.

Stop n.2 showcases the area’s wetlands where lots of wild life including the white-tailed deer roam. The duckboards lead to the foot of a steep hill, which was very slippery after the rain (and during colder times, they turn into black ice). We decided against breaking bones and took an unofficial trail from the left of the cliff-face up to the top. It was a very smart choice, and we agreed that if we had been walking from the opposite direction, it would have been impossible to notice the slipperiness before it would have been too late.

On top of the hill comes stop n.3 and enormous anthills. Like earlier on the Soukka hills (stop n.14), these hills also had dry, dead pine trees (kelo in Finnish). Gently, the trail once again descended down towards a row of houses, turning left just before them. We trailed on small pine needle covered paths for a few minutes until we ended up on an actual asphalted road. And suddenly, there on the right, jutting from the ground, was stop n.4, the enormous Hanikan siirtolohkare or the Hanikka glacial erratic. Check out more about this huge hunk of rock in our separate posting.

Stops from 5 to 8 on the Hanikka trail include wonderful duckboards over tall shrubs, a Bronze Age heap tomb, and forest views where you can stop to grab a few blueberries on your way. The length of this part of the track is about 2km, and it is the most accessible since you can partially take advantage of the wider, sand walkways and tracks going alongside the Hanikka trail.

The trail continues across Soukanväylä road, where a signpost directs you away from the wide gravel road and further into the woods.

Stop n.5 comes soon after, and it’s a shrub marsh where wild rosemary grows. Even in the winter, you can smell the intoxicating scent of the wild rosemary but in the summer, it can be almost overpowering.

The duckboards taking you over the marsh were almost covered with water after the recent storm but they were great fun! Admittedly, we did get a bit wet but that’s why we had hiking boots on.

Stop n.6 challenges people to look for Ice Age markers from the cliffs. We just sat down on a rock, had some snacks, and continued on the trail because the most exciting stop was next: n.7 and the Bronze Age heap tomb! Once again, the trail crossed the gravel road, and then we saw steps climbing up to higher ground. The terrain was challenging so if you are there with younger children or those with less mobility, make sure you take care.

There, on top of the Sundsberget hill, were two ancient tombs covered with large chunks of rocks. The signpost shows how important Bronze Age people were buried inside the heaps, which were situated to look over ancient seashores. It is very important to remember that these are protected tombs: you must respect them and not walk on them!

The trail once again crossed the gravel sports trail and continued into the woods. The undulating terrain is covered in shrubs, and if you are there in the summer, you may be want to stop (despite the mosquitoes) and pick some blueberries as a snack.

The last five stops from 9 to 13 of the Hanikka trail go alongside the beautiful seaside archipelago and a bird tower, and finish with never-ending duckboards over the water. The length of this part of the track is about 2km, and it is more accessible to younger children until stop 11; after that it becomes more tricky because it mainly consists of narrow duckboards.

As you get closer to the sea, you pass through extremely tall pine-trees, reaching impossibly high in the sky. By the time you reach stop n.9, the scenery has changed from thicker woodlands into views over seaside groves, overly lush in their greenery. There are plenty of birds in this area, and it’s a great place to see if you can see some great spotted woodpeckers (Dendrocopos major) or even some more rare lesser spotted woodpeckers (Dryobates minor). The path next to the sea is on duckboards but you can also use the road, Matasaarentie, if you want to walk on more flat surfaces.

When you walk further on to n.10, you may be able to spot bats, who enjoy the rich feeding grounds alongside the Suinonsalmi strait. The strait looks more like a tiny island since it’s attached to the mainland only by the thinnest landmass possible (which was almost over-run with water when we visited).

The trail turns back inland a bit, and you can walk on duckboards right next to the water even though they are very wonky. If you want to be safe, you can always walk in the more forested area next to the duckboards.

There is even a proper road until you reach stop n.11, which is next to another island called Matasaari overlooking the Norrströmmen narrows. There is even a tiny chapel on the island you can visit as well as remnants of houses of yesteryear. If you don’t want to continue to the duckboards, just follow the road Matasaarentie back to Suvisaarentie or the jogging tracks.

The path leading to n.12, the bird-watching tower overlooking the lush rushes (seaside reeds) is relatively flat, and you can concentrate on enjoying the ambiance of some beautiful old leafy trees. Our trip happened after some heavy rains so this was the muddiest part of our trek. The bird tower is at the edge of Kaitalahti bay, hidden until you basically walk into it. The last few steps were a bit steep but the views from the tower made it worth our while.

The last leg of the Hanikka trail from stop 12 to 13 is the most unique: it is kilometres of duckboards over the water, just at the shoreline. The trail goes under massive alder trees and willow bushes, offering some shade. It is great fun walking on the duckboards but you have to know the technique and manners of how to pass someone. If someone comes from the opposite direction on the duckboards, try to anticipate your speed, and then stop at a flare of the duckboards to let the person pass you by. You can also indicate to the passersby that you will wait for them to pass you in their own speed. This way no one has to get their feet wet! Remember to say thank you if someone does this for you.

We continued on the duckboards even after we ended up on a proper road; the last bit of duckboards took us exactly to the place where we started our trek, next to Soukanväylä road.

Address:  There are several places where you can take the trail but these, in my view, are the best two.

How to get there: The best way to get to Hanikka is to use public transport. There is some parking available for cars but due to the popularity of the area and the fact that it’s near housing, it is best to leave your car at home.

Accessibility: A lot of the trails at Hanikka require some skills in walking on uneven ground. There are a lot of duckboards, some slippery cliffs, and a fair amount of climbing up and down. Best suited for children who are used to walking independently on uneven terrain. There are some sections which are more suitable for those who are not so sure-footed. Not suitable for wheelchairs, people hard of walking, or children’s buggies.

Facilities: There are no special facilities at Hanikka.

When to go: Hanikka has something to offer at any time of year. There are no street lights on the actual trail. Take care and be careful when walking at Hanikka with snow on the ground because some holes and roots will be hidden.

What to wear: Make sure you’ve got a good pair of shoes on. The duckboards can be slippery when wet.