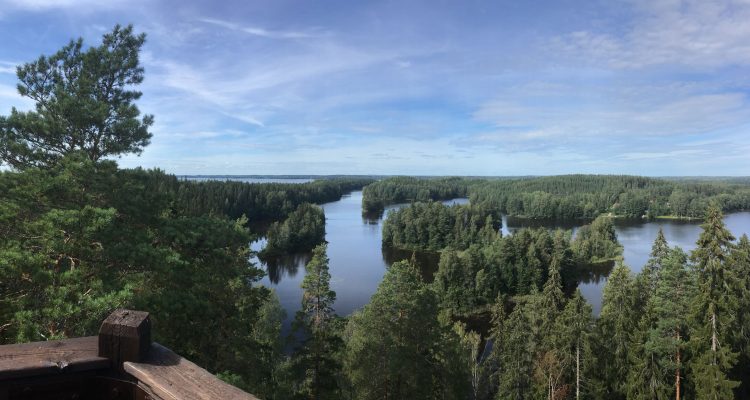 Kaukolanharju observation tower at Saari Folk Park welcomes visitors during summer months, and for a small fee you will have access to beautiful views at Häme Lake Uplands region. This summer over 2000 people visited the Kaukolanharju observation tower, but in case you missed it, make sure to visit it next year. The Kaukolanharju ridge is located between Pyhäjärvi and Kuivajärvi, and protected by Natura 2000. It has served as an observation area since the 19th century. The Saari Folk Park was founded in 1932 as a public recreation and leisure area on land owned by the Saari estate. The history of the Saari estate goes back to 16th century, and the area has inspired many artists such as Robert Wilhelm Ekman, Magnus von Wright and Albert Edelfelt. Edelfelt’s famous painting Kaukola Ridge at Sunset draw inspiration from this view in 1889, and it is currently displayed at Finnish National Gallery Ateneum in Helsinki.

The views from the Kaukolanharju observation tower are spectacular

According to the Ministry of the Envinronment there are 156 areas in Finland that have been classified as nationally valuable landscapes. They represent the cultural landscapes of our country and that must must be taken into account in land use planning. This landscape in Mustiala-Porras-Kaukolanharju area in Tammela is one of them.

The observation tower was designed by A. Nummi and built in 1926. That was even before the Saari Folk Park was established. Unlike some other observation towers, it seems to fit to this area perfectly. It has been renovated to its original design, so do not expect an elevator to take you to the top. The tower is 21 meters high, but it is located at the top of Kaukolanharju ridge in the Häme Lake Uplands, so alltogether the tower rises approximately 140 meters above the sea level. I visited the tower at the end of August, but I can almost still feel climbing those stairs and up the hill in my bum.

The lake in the far left is Pyhäjärvi, and the lake on the far right is Kuivajärvi. In the middle you can see Saarensalmi water area connecting the two lakes, and few small islands covered with trees. Even I am inspired to paint this view and I don’t have one artistic cell in my body.

Dogs are also warmly welcome to the observation deck. I had a feeling I should leave mine at home because he is a pretty heavy puppy who doesn’t yet know how to get down steep stairs. When I was looking at my friend carrying her dog down the steep staircase at the tower, I knew I had made the right decision. Otherwise we would still be up at the tower with my dog.

How to get there: You can get to Saari Folk Park by car, by bicycle, and by public transport. It is located just 8 kilometers from the centre of Tammela municipality and approximately 100 kilometers from Helsinki.

Accessibility: The observation tower and its surroundings are not accessible for disabled. The Saari Folk Park area however on the other side of the road is accessible and you can move around in a wheelchair or with children’s buggies.

When to go: You can visit the area at any time of the year, but the Kaukolanharju observation tower is only open during summer months from June to August. The opening hours have usually been 12-18 daily, but next summer’s timetable will be published later on.

Facilities: There is a picnic table close to the observation tower. Other facilities in the Saari Folk Park area include lean-to shelters and outhouse-toilets. The Southwest Häme Cabin (Lounais-Hämeen Pirtti) serves as an order restaurant, and there is also a kiosk, which is open during summer. The kiosk is located on the other side of road.

Special to remember: There is a small entrance fee to the observation tower as it is hosted by the Finnish 4H Organisation. This summer the entrance fee was 5€ for adults and 3€ for 7-12 year old kids. Only 10 people are allowed to stay at the observation deck at once. Please be careful when ascending and descending the wooden stairs, and note that they are steeper at the top of the tower.

The municipality of Tammela is truly blessed with nature. Check out also these nature destinations in Tammela: