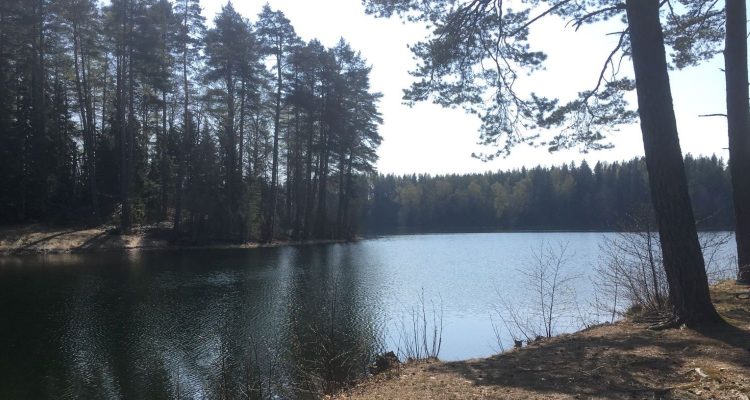 The Saari Folk Park is located in Tammela in Häme Lake Uplands region and known for its ridges, lakes and sandy shores. The Folk Park was founded in 1932 as a public recreation and leisure area by Southwest Häme Local Heritage and Museums Association. It is a popular place especially for swimming and picnic, but it has many interesting and historical sights too.

I was passing by Tammela and decided to strech my legs with a little nature walk and geocaching at the Saari Folk Park. I have been to the park few times before, also attending events at Southwest Häme Cabin (Lounais-Hämeen Pirtti) located there, but I recently signed up for geocaching with some friends and this was a perfect opportunity to test my ability of solving mysteries and finding the first cache on my own.

Saari means island in Finnish, and it is a very descriptive name for this park. Water is never far away. The park is located next to Kuivajärvi lake, but there are many other smaller lakes and ponds in the area. Those lakes hold some mysteries of their own.

After parking my car near the Southwest Häme Cabin I decided to first check out some historical canoes, and then head to a trail around Suujärvi. There is an old observation tower on Kaukola ridge, but usually it has been open only during the summer months from June-August, so I didn’t even go there this time.

The historical canoes are stored outside near the shore of the Kuivajärvi lake, so they can be visited anytime. The canoes have been found from the lakes, the other one from a nearby Suujärvi lake and another one from Hirsjärvi further away. These type of canoes are carved from a single wood trunk, usually pine trees, and they were used for fishing in small lakes in the Häme Uplands region since the Stone Age until the 19th century.

There are few short trails at the park, but the park also serves as a starting point for the 200 km long Häme Ilvesreitti trekking trail.

Nature trail, 2,7 km
The nature trail at Saari Folk Park departs from the main parking area and is wide and flat. It goes along Lake Kuivajärvi and makes a little circle in the forest before returning back to the parking area the same way. There is a lean-to shelter by the trail.

I took this trail to see the ridge as it has this historical channel where logs used to be transported from one lake to another. Back in the day the Saari Folk Park area belonged to Saari estate, and forestry was one form of income for the estate. There are many waterways in the area that were making the transportation of the logs easy, but this one narrow channel was needed. Think about how trees are cut today versus how they used to be cut by hand at the old days, and also how different the transportation was.

How to get there: You can get to Saari Folk Park by car, by bicycle, and by public transport.

Accessibility: The area is generally accessible and you can go around in a wheelchair or have a buggy for children. The nature trail is wide and flat.

When to go: You can visit the area at any time of the year. Early summer is best for swimming.

Facilities: There are picnic tables, lean-to shelters and outhouse-toilets in the area. The Southwest Häme Cabin (Lounais-Hämeen Pirtti) only serves as an order restaurant but there is a kiosk, which is open during summer.

Special to remember: The beaches here are great, but if you want to swim in the area, check that the lake doesn’t have blue-green algae in it as it’s a health hazard to humans and animals. The Lake Wiki shows up-to-date algae info. Remember to respect everyman’s rights and oblications and do not leave any trash behind. Temporary overnight stay is allowed only at Kuivajärvi lean-to shelter, and fire can only be made at the designated fireplaces when the forest fire warning is not on. Check the latest information on forest fire warnings at the Finnish Meteorological Institute’s website.

The Saari Folk Park is part of the Häme Lake Uplands. Häme Visitor Centre, Korteniemi Heritage Farm and Liesjärvi National Park are all in relatively close proximity to Saari.