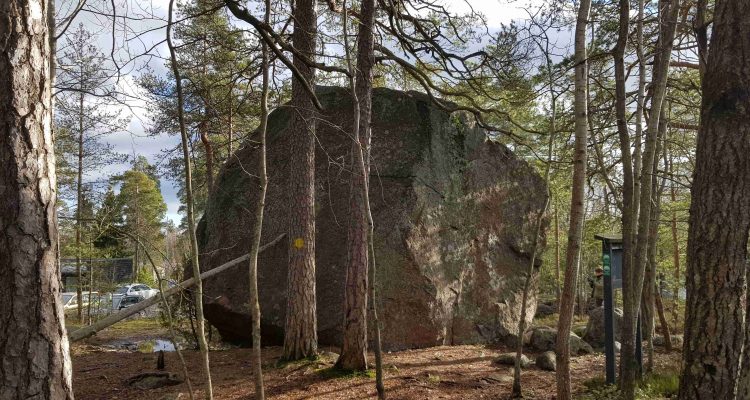 The humongous Hanikka glacial erratic stands, as it has for the past 12 000 years, firmly in place among some pine trees. As we approached, a young couple stood next to the gray boulder, one third of the height of the hardened giant. They looked determined.

This massive rapakivi-granite boulder is one of the largest glacial erratics in Espoo, and it weighs a staggering 200 000 kilos (441 000lbs). A great trivia bit for you to know: rapakivi is one of the few Finnish words that has made its way into English! It refers to a type of granite that was extensively researched in the 1890s in Finland, thus leading into the word being adopted into most languages.

There is an information board (only in Finnish) that asks you to feel around for the crystal structures of the boulder. Look for colourful, pink/yellow/green ovoids (oval shapes) which point to potassium feldspar mineral deposits in the otherwise gray granite. The board tells you that this particular glacial erratic has travelled there from around the Vyborg area, which is now on the Russian side of the border.

The couple sizing up the erratic had laid down air-mattresses next to it. Even though the boulder is protected, it doesn’t forbid climbing, only disturbing the boulder in anyway. The man was rubbing chalk on his fingers and stretching. We looked in fascination as he grabbed a hold of the granite facade with his fingers and then he slowly let go: he was hanging literally by his fingertips from the boulder.

Finland has many remnants of the last Ice Age, most of them are glacial erratics, which are pieces of rock carried by the glaciers for hundreds of kilometres. Another excellent example of a glacial erratic, or giant’s stone (hiidenkivi) as Finnish people called them earlier, is the Kummakivi erratic in Eastern Finland. Finnish people believed that giants had gotten angry, grabbed the side of a whole mountain, and thrown a huge chunk of rock at a nearby church… but always missing the church. Take a look at some other signs of the Ice Age in Finland.

How to get there: The best way to get to the Hanikka glacial erratic is to use public transport. There is some parking available for cars but due to the popularity of the area and the fact that it’s near housing, it is best to leave your car at home.

Accessibility: There are no specific tracks next to the glacial erratic but there are plenty of accessible asphalt roads around it. This makes the boulder very accessible.

When to go: You can go see the glacial erratic at any time of the year.