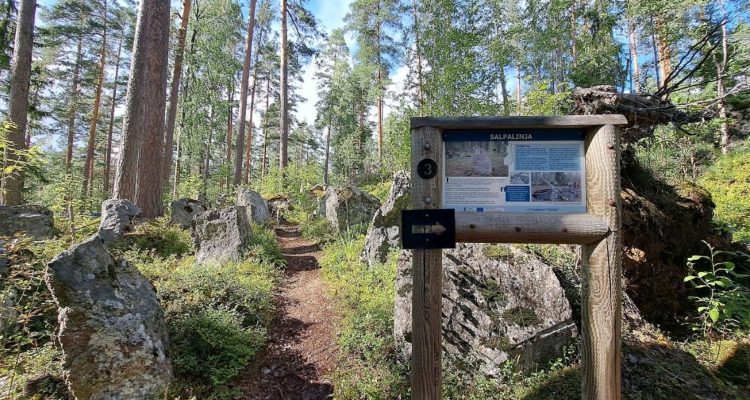 Vilkaharju nature trail located 5 km from the centre of Sulkava is a two-part trail that showcases the historical Salpa line. Part one is about 3.1 km and part two is about 3.6 km, both of which can be taken separately. We decided to walk the shorter one, saving the longer one for later. There is a small parking lot next to the main road, right where the shorter path starts. For the longer path you need to cross the road.

I guess one is supposed to go the path clockwise as there are arrows leading to the left from the signs, but as we did not notice them, we walked it counterclockwise. Also, we wanted to go first to see the lake and go downhill. The beginning of the path is a nice wider road as some parts of the path are also accessible with wheelchair. There are yellow spots well placed along the whole trail, so it is very easy to follow.

After going downhill for a while, the path turns to the right. We walked along a small path, ate blueberries while strolling along passing swamp areas.

As the trail is part of the Saimaa Geopark site, there are signposts telling about the sights and history of the place. Most of the time we followed a narrow path going up and downhill. It is a very easygoing path overall with beautiful views.

The nature trail led us past a Stone Age dwelling site and rocky outcrops. Along the way we also noticed a lot of fallen trees. Apparently the Asta storm raged in July 2010 which tor down the trees from their roots.

At the end of the trail, we passed the Salpalinja, officially called Suomen Salpa or Finland’s Latch, which is a bunker line on the eastern border of Finland. It was built in 1940–1941 during the Interim Peace between the Winter War and the Continuation War and further in 1944 to defend Finland against a possible Soviet invasion.

The line is 1,200 kilometres long, stretching from the Gulf of Finland to Petsamo. On this spot the residents of Sulkava also put up a memorial in summer 2017.

After the Salpalinja it was only a short way back to the parking lot.

Check out also Visit Sulkava and Saimaa Geopark for more information. Also read our other post about Vilkaharju nature trail part 2 – A stunning view over Saimaa.

More about the Salpa line at our site