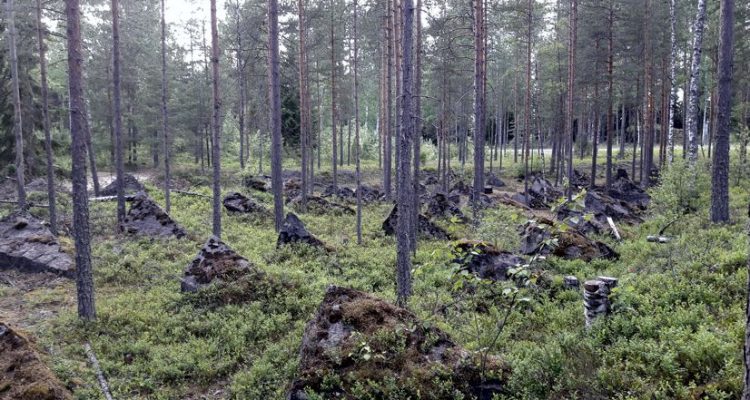 I have driven past a sign pointing to Salpa-asema dozens of times on my way but only a few years ago I stopped to explore this area in southeastern Finland for the first time. You don’t immediately understand the significance of the area because the area is very humble and unassuming but it is a nature area where one of the most important Finnish defences were build during World War II.

At first, it looks like the sign points you to a simple carpark. However, as soon as you look around, you start seeing strange shapes in the ground southwest of the carpark. I visited the area with some teenagers last time, and even though the heavy history of the place wasn’t necessarily all discussed, it was a great way to explore both the history of Finland and nature at the same time. I knew the history of the place but I let them play around for a bit before I asked if they knew what the sharp rock was… the one they were trying to balance on. Trying to guess if it was natural or man-made, the teenagers took it as a challenge to try to understand what was going on.

Some of the answers they came up with were actually very plausible: the rocks could have been erratic boulders left by the last Ice Age because they were all facing the same direction. But after some running around they agreed that it was unlikely. When I told them they were actually anti-tank defences meant to stop the advance of invading forces, the teenagers looked around and actually started to think how it would work. The jagged rocks continued in a line as far as the eye could see, into the gray-green pine forest.

We walked on a few meters, only to bump onto the second specialty of the area: a bolt bunker. The doors were still open, and the owner of the area was there to explain a few things to us and show us around inside the bunker. The teenagers agreed that it would have been quite hard to live inside the bunker on the hard wooden beds, not being able to go out from the tiny quarters at all. On that note, the bunkers are free to visit but the land is partially owned by private persons so they lock up the bunkers at night for protection and upkeep.

The large open area continued further to the left with 2-3m trenches dug into the sandy soil. The undulating terrain as well as the bunker were completely invisible even when you were close by because the vegetation grew directly on top of the fortifications (obviously, to hide the place from the enemies). Nature had been respected as an ally when these bunkers and trenches were built because it provided both food, water, and protection.

The sandy heath forest invites you to look into the distance. The straight pine tree trunks seem to almost magically fade away when you peer into the horizon. Even though the area here is part of a particularly violent era in Finnish (and world) history, you can also appreciate how important and precious forests really are: peace and war, beauty and ugliness, natural and unnatural all exist side by side. But the best thing is that nature is slowly winning over, claiming back the quietness that existed in these forests for thousands of years. After we left the area, the teenagers and I talked for hours about peace, about nature, and the importance of respecting both.

More on the Salpa bunkers

Salpalinja or the Salpa line was a defensive line of fortifications and bunkers built on the eastern border between Finland and Russia in 1940–1944. They continue all the way from the Gulf of Finland to Lapland. These fortifications were never used because peace was made before the Soviet armies reached the Salpa Line; this is one of the main reasons these bunkers are all still intact.

All in all, the 1200km long Salpa Line consists of over 700 reinforced concrete bunkers, 25 caves, over 3000 wooden field forts, hundreds of kilometres of battle and communication trenches as well as anti-tank rock barriers. Luumäki is one of the most fortified areas with about 120 structures around it.

Address: Type Lappeenrannantie 394, Luumäki on your navigator. It will take you to the car park area nearest to the start of the path.

How to get there: You can get to Luumäki Salpa-asema by car, by bicycle, and by public transport.

Accessibility: There are varying degrees of accessibility to the bolt bunker line and the fortifications. If you stick to the roads, you may be able to see the area even in a wheelchair or with a children’s buggy. However, as this is a historical site from the WWII era, the area has been dug in a way that makes it difficult to move around. There are several very high and sudden drops so make sure you keep an eye on the children.

When to go: You can visit the area at any time of the year but the best time is when there is no snow (you see much more of the terrain). You can visit the park during snowy or wintery seasons but make sure you are careful because there is no winter upkeep (no snow removal) and a lot of the more tricky areas can be hidden by snow. You don’t want to fall and injure yourself (or worse). Also note that there are no lights in the area so make sure you visit the area when there is enough light.

What to wear: Mosquito repellent in the summer. Hiking shoes are good but normal sneakers will suffice as well.

Special to remember: There are no facilities in the area, just a carpark. Making a fire is absolutely forbidden because the area is protected by law. Also, don’t remove any items from the area.