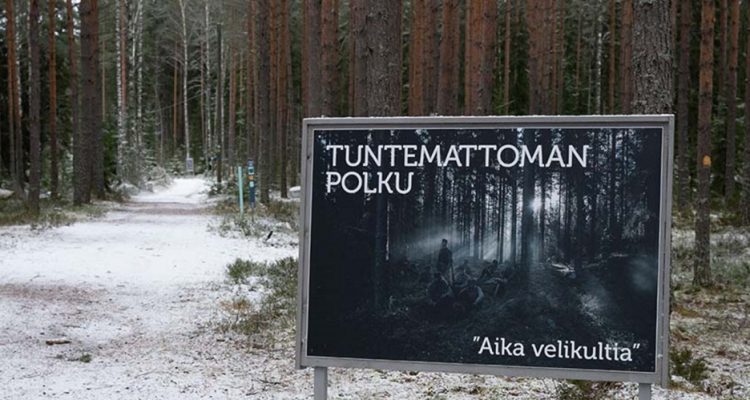 If you are interested in nature and war history, the Trail of the Unknown Soldier in Virolahti in the South-Eastern corner of Finland is worth a visit. The 4,6 km forest and nature trail starts at the Bunker Museum with some war-time fortifications in its vicinity. The trail is named after the war novel Tuntematon sotilas (unknown soldier) by author Väinö Linna, and citations from the novel and subsequent filmatisations can be seen on the trail.

We walked the trail in late November when the museum was closed. However, you are free to check it and the fortifications out whenever it suits you best. The trail is very even, easy and doesn’t offer much more than typical Finnish forests or even completely cleared sections. The frequent sight of bunkers, anti-tank obstacles and trenches, however, make the experience more interesting. You can even enter some of the bunkers, but it can be a bit scary and dark, so bring a flashlight with you!

Secondly, there’s also an AR or augmented reality based mobile phone quiz available, in which you get questions based on the novel whilst on the trail.

The Salpa Trail is a 50 km hiking route that follows the line and offers a good way for hikers and mountain bikers to see the nature and cultural environment of South-East Finland. On the way you can continue exploring the numerous fortifications.

There’s also a third trail starting at the museum, the 4,3 km Wilderness Trail. So, if you want to raise your heart beat even more, try the nature gym with its 10 exercise points!

How to get there

You can start the trail of the Unknown Soldier at the Bunker Museum.

Services at the Bunker Museum

The museum building houses a café and toilets. There’s a fire hut and outhouse in the museum area. Check out more details from the Bunker Museum website.

If you want to experience more

Make sure to check out Finland’s bolt bunker Salpa line at Luumäki as well. It’s only 68km to the North.