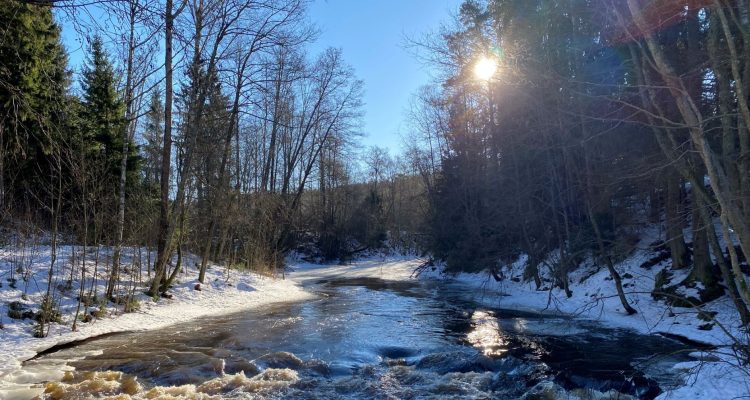 Latokartanonkoski rapids are located in Kiskonjoki river in Perniö in Salo municipality. The area hosts a well market nature trail with two beautiful bridges over the river. The area is partly protected and partly on a private land. The rapids are good for spotting white-throated dippers as they spend winters in the area.

We visited the Latokartanonkoski at the end of February when there was some snow on the ground and the trails were very slippery. We had equipped our shoes with ice grips, which are mandatory in winter in any case when walking with Nalle. On Saturday morning there were only few bird watchers and plenty of space in the parking area.

Latokartanonkoski nature trail showcases the nature and history of the area

The nature trail in the area is about 1,7 kilometers long with few stairs and bridges along the way. The trail is well marked with yellow and green signs. By following the yellow signs you will walk a circle trail around the area. Green signs take you to death ends, but they are well worth exploring, too. The trail easily becomes several kilometers long route, if you loose your ice grippers from one of your shoes and have to go search for it for a second round..

The parking lot is located closer to the lower end of the rapids. There is an information board at the parking lot, and that is where the yellow and green signposts begin. If you want to follow the yellow circle trail, you must walk about hundred meters back along the road and then turn right towards the river.

The Kiskonjoki river drops down approximately 17 meters within a 500 meter distance here. Several indications of Bronze and Iron Age settlements have been found along the river. King Gustav I of Sweden founded the Nänen royal manor by the river in 1556, and this is where the village of Latokartano originates. The manor was located where Kiskonjoki river separates from Perniönjoki river, an area called Muntolannokka. It relocated away from the village in 1690.

Latokartanonkoski rapids have had a mill as early as 14th century. The biggest ruins you will find on the site have been built in 1805. It doesn’t seem that long ago, but when you think about it, it goes back five generations. In addition to the mill ruins, you can find several other ruins such as miller’s cottage and few rocks from old hammer workshop nearby. The hammer workshop was built in 1830 and demolished in 1905. The mill was terminated in 1962. Opposite the mill there used to be a saw mill, and below both of these in the middle of the river on an island there used to be a moonshine distillery between 1848-74. There’s a lot to explore in the area!

The white-throated dippers, also known as the European dippers or just dippers, are easy to regocnize from the white area in their chest while they are standing in the river. We saw one bopping on ice on the river bank. This is the kind of dancing on ice I like to watch.

Accessibility: The trail is easy but there are several stairs along the trail.

When to go: This area is recommended to be visited when there is no snow on the ground as there is no upkeeping of the trail in winter and it will get slippery. The white-throated dippers stay here over winter. The most impressive rapids can be seen in spring.

What to wear: Don’t forget your binoculars for birdwatching.

Special to know: Leave your matches at home, as making fire is prohibited. Fishing in the river is very restricted. Do not trash as the trash can be fatal for the birds and otters in the area. The river banks are not fenced in most parts. This means that you should be very vigilant if you visit this place with children. Keep your dog on the leash for its safety.

Other similar destinations in Southern Finland

If you liked this place, check out also the following rapids in Southern Finland: