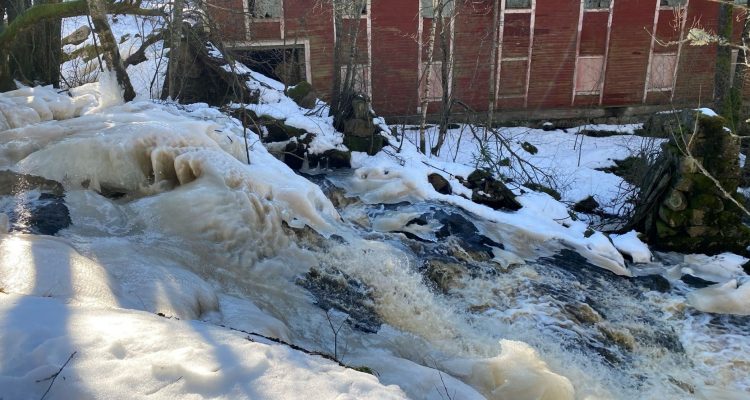 Juvankoski is a waterfall in Salo municipality in Finland. It originates in a dam in Pernjärvi lake in Pöytiö village. A small Pernjoki river flows from Pernjärvi to Ylisjärvi lake. The rapids in it are in total 21 meters high with the main waterfall being about 8 meters. Juvankoski represents the 19th century paper industry environment that has survived in its original form here.

History of Juvankoski and the buildings in the area

One of the first paper mills in Finland was established in here in 1820. The factory produced cardboard and fine paper from rags. It burned three times until it was completely destroyed in the fourth fire in 1902. After that the rapids were utilized to produce power to a saw mill. Horses and cars were used to bring logs to the saw mill. The mill operations were terminated in 1964. Next to the saw mill was a hydropowerplant, which produced energy to Pertteli, Kiikala and Muurla villages. It stopped operating in 1970.

On the shore of the Juvankoski dam basin is the old main building of Juvankoski paper mill, which was used in the production of cardboard. The yellow wooden building is the oldest production building that is still standing in Finland from the early days of paper industry. The log building standing on the top of a high cliff has served as a living space for the powerplant employees. On the edge of the rapids there is a two-storey high red sawmill building from the beginning of the 20th century. The sawmill’s equipment has been preserved. In addition, high rock bases have been preserved in the rapids. They used to connect the 200-meter-long wooden gutter to the hydropower plant.

I visited the Juvankoski early March when the waterfall was covered with ice formations. At first I drove to the yellow building, which now belongs to Salo parish. I soon realized I couldn’t access the rapids from the top, and I had to go to the red sawmill in downstream. I moved my car there and walked to the red building. I tried to see the waterfall from the corner of the sawmill, but it was still a bit hidden. I then learned, that the best way to see it was to cross the small bridge in downstream and wonder closer to the falls in the forest. There wasn’t any clear path due to snow, but I got pretty close.

Accessibility: The waterfall is hidden behind buildings and seeing it properly demands few steps on very uneven terrain.

When to go: This area is recommended to be visited during spring when water level is high on the lake and there is plenty of water gushing through the dam. In summer the waterfall might dry out.

If you liked this place, check out also the following rapids in Southern Finland: