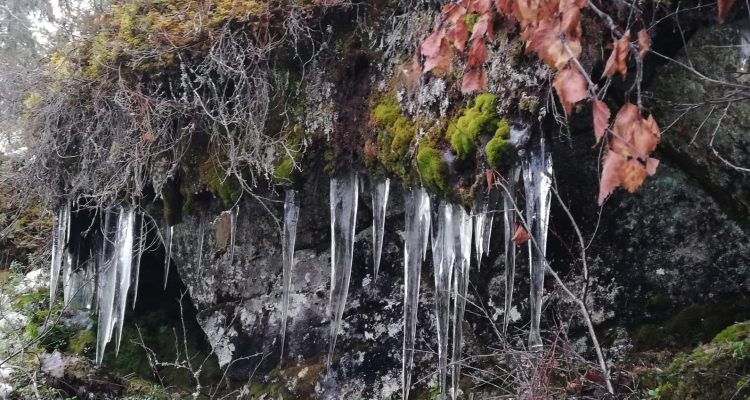 If you happen to be driving by Tepasto village in north of Kittilä, have a little walk at Perhejärvi nature trail. There is a nice few kilometers walk to Kaakkurilampi (kaakkuri=red-throated diver, lampi=pond) and a nearby fire place. You might also encounter some gnomes in this trail! 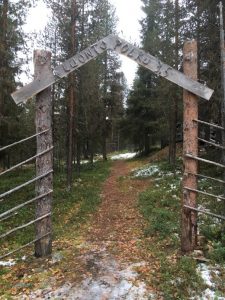 I went to Tepasto when it had already been snowing a little, but it was still possible to walk in the forest. The moose hunting was about to start soon, so this was the perfect moment to head to the nature trail. The trail begins from Tepasto elementary school’s yard, where there is plenty of space to park the car. The first part of the trail is in the forest, but some parts later on are very wet. I was walking with sneakers on so I only made my way to the first fire place and Kaakkurilampi, and then walked back the same way. The trail would have continued to Perhejärvi, where there is another barbecue hut. 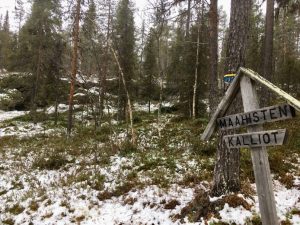 The path on this trail is narrow and has some slippery rocks along the way. It soon leads to a place called Gnomes’ rocks (Maahisten kalliot). Gnomes in the Finnish mythology are small, human-like creatures, who live underground in their own world. Gnomes are mischievous and usually invisible, although there are stories of them showing up looking like ants. If a person in the forest gets enchanted by a gnome, they easily get lost and cannot find their way back.

According to one legend, this area was home to gnomes. The children in the village used to walk cows through this area to eat grass, and everyone in the village knew about gnomes and avoided stopping here. One girl was brave and sat down by the rocks as her feet were getting tired from walking. Her grandmother had always warned her about gnomes and said that if they offer something to eat, she shouldn’t take anything, otherwise she becomes a gnome herself. When the little girl was sitting by these rocks, suddenly a doorway appeared and an old gnome game out. The girl was invited inside to the cave and she obeyed, feeling enchanted. The gnome offered tasty looking strawberries to the little girl, who was hungry. But she remembered what her grandmother had told her and declined. The gnome then offered her a tasty looking drink, made of blueberries. The girl could smell the fresh blueberries and honey in the juice and just when she was about to take a sip, she remembered her grandmother again and said no firmly to the gnome. She said she’d better leave and thanked the gnome for the visit. She ran outside and continued running home as fast as she could. When she got back home, she told her grandmother about the gnome. The grandmother thought the girl had fallen asleep and dreamed about the gnomes, but nevertheless the girl remembered this encounter ever since and years later told her own children about gnomes, and she warned them not to eat or drink anything that the gnomes offer. 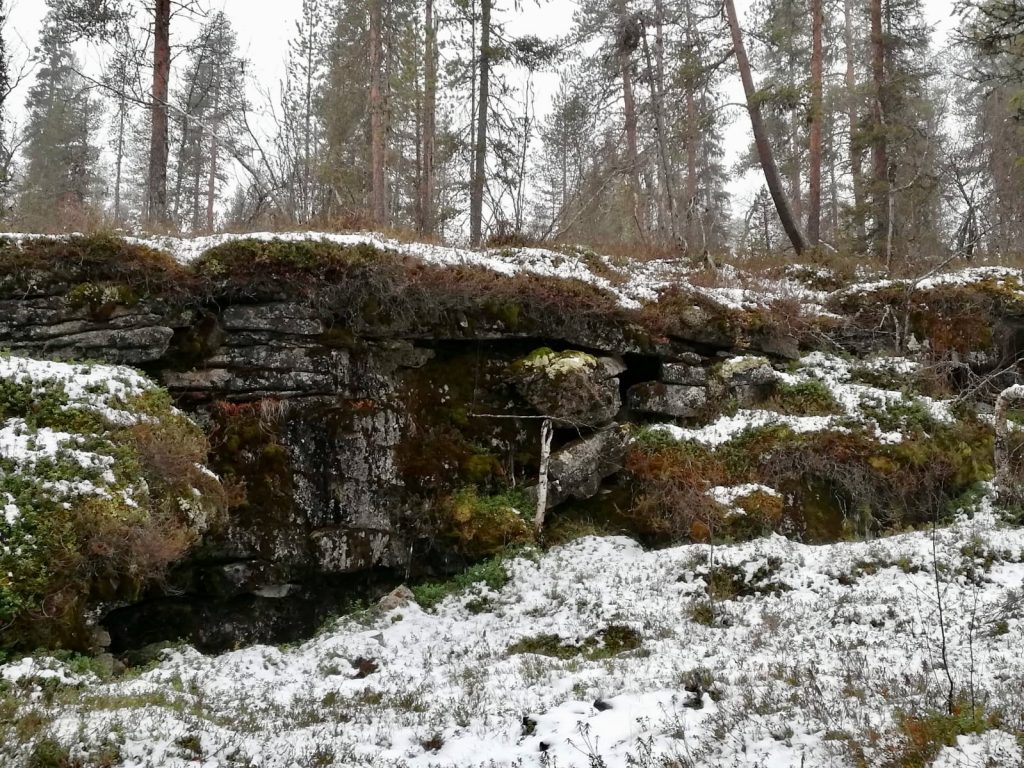 After the Gnomes’ rocks I continued walking towards Kaakkurilampi. Before that I found a barbecue hut, which had some firewood, matches, an ax and even a guest book. This well-maintained fire place was old but according to the guest book it was a pretty popular place to stop by during the summer months. Based on the tracks, somebody had been here with a snowmobile already. Instead of making a fire I decided to continue walking to the lake before heading back to the village. The day was foggy and Kaakkurilampi was covered with mist. It looked like a place where gnomes could easily show up. 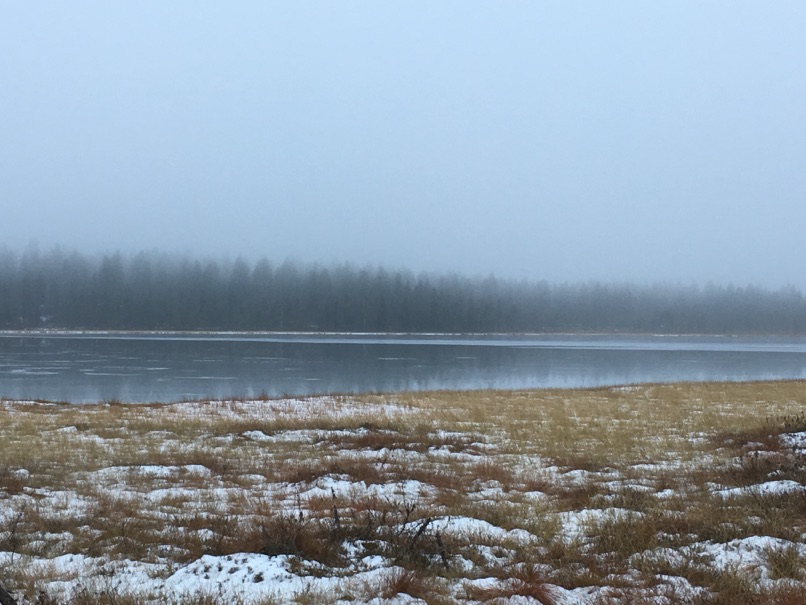 One thing that caught my eye in this nature trail was a moss hanging from trees. It’s called usnea. You can see a lot of hanging usnea everywhere in Lapland, and the main reason for it is the clean air. Usnea is very sensitive to air pollution, especially sulfur dioxide. But where the air is unpolluted, usnea can grow very long and look like a beard on trees. It is sometimes used as a bioindicator, because it tends to only grow in those regions where the air is clean and high-quality. 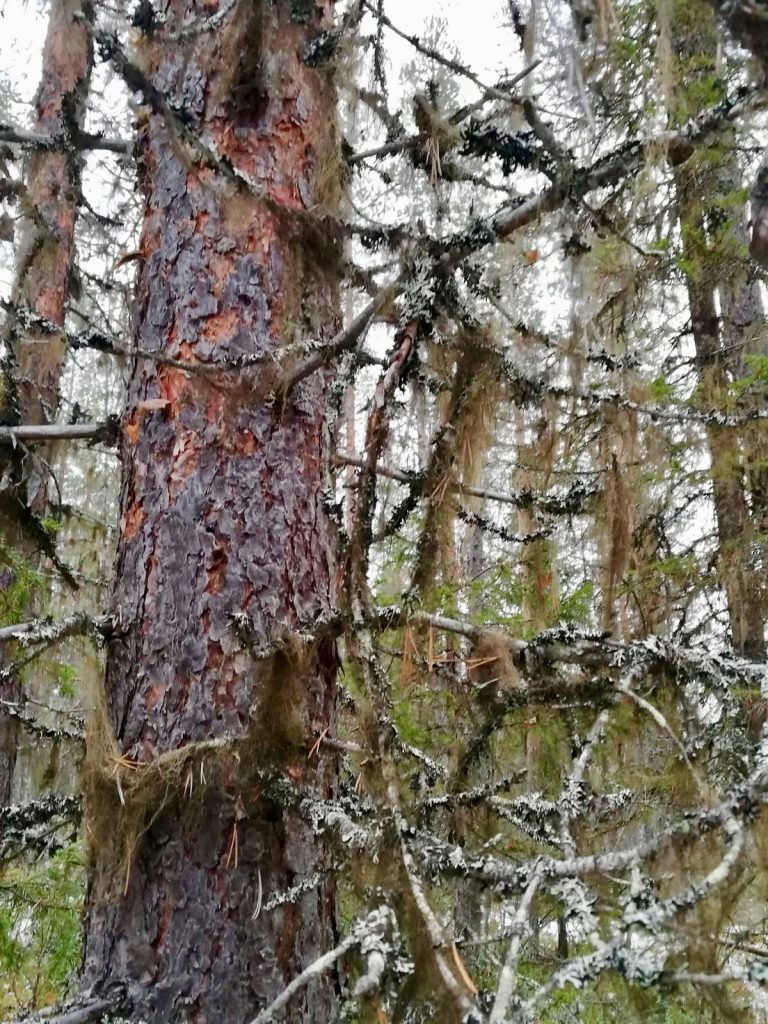 Follow the signs to “Luontopolku” (nature trail) and “Tepaston Ala-Aste” (elementary school) from the main road number 9562, going from Köngäs to Raattama. Tepasto village is located approximately 30 km north from Levi Ski Centre and 45 km north from the center of Kittilä.

The blue dot on the map below is the fire place. The trail continues from there to Kaakkurilampi and Perhejärvi. Pikku-Pirkko and Iso-Pirkko on the map are bogs. 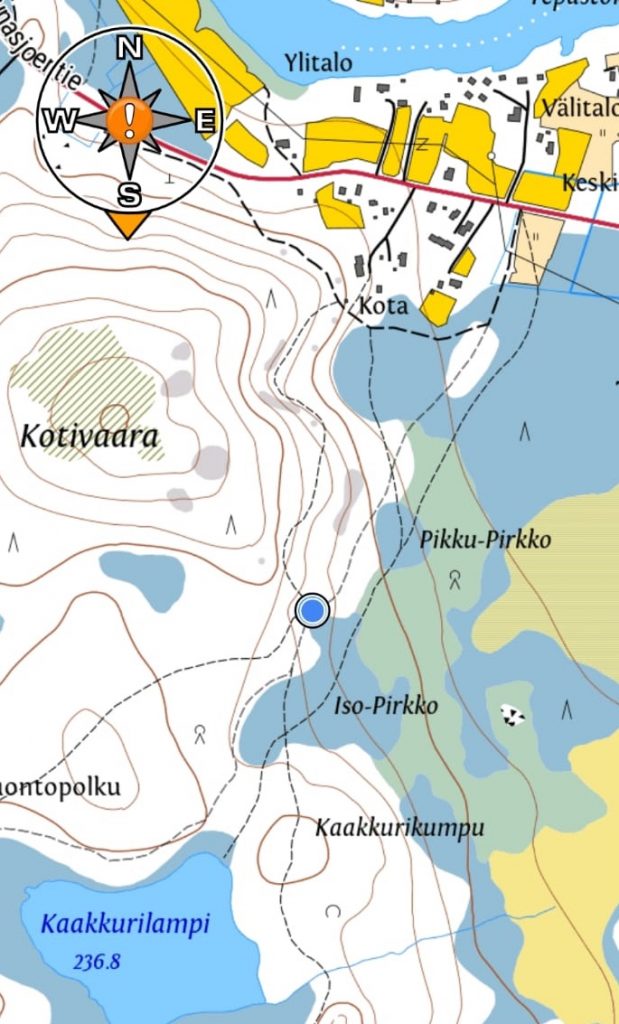 When to go: This nature trail is only accessible from spring to autumn when there is no snow on the ground.

What to wear: Mosquito repellent in the summer. Hiking boots or rubber boots are highly recommended.