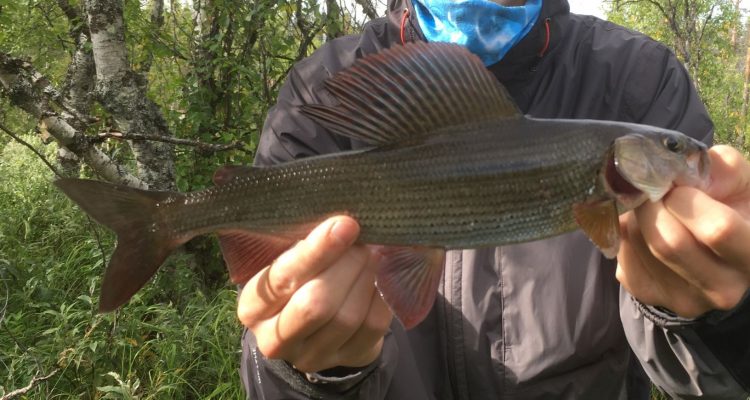 Catching grayling in Lapland is an unforgettable experience. Grayling is common in most rivers and many lakes in Lapland, northern Finland. The best places to catch the grayling are located in the remote wilderness areas. There you can find the biggest fish, even up to 2 kgs.

When I was young we used to spend a lot of time at Lake Inarinjärvi, and there I learned to value this beatiful silver fish with a high dorsal fin. Local people’s diet consisted mainly of what the forests, lakes and rivers had to offer: reindeer and game, arctic berries, root vegetables, and fish. Grayling, salmon, arctic char, white fish, vendace, and trout are among the most valued fish in this region.

Table of contents
Inarinjärvi is the third largest lake in Finland
Fishing permits in Finland
Where else to catch grayling in Lapland?
Enjoying the valuable catch

Inarinjärvi is the third largest lake in Finland

Beloved lake has many names. Inarijärvi is also known as Inari and Aanaarjävri, Anárjávri, or Aanarjäu in Samí. It covers an area of 1084 km² and it has 3308 kilometers of shoreline and 3318 islands. The lake surface is normally approximately 117-119 meters above sea level but that is being influenced by a Russian powerplant in Paatsjoki river.

We always used to depart from Veskoniemi harbor by boat and head to over Moossinanselkä open water to an island where my relatives used to have a cottage. Close to the cottage is Korkia Maura island, which was one of my favourite sites to visit as it had a cave with eternal ice inside. Ice wasn’t melting even in summer, and you could visit the cave and walk over ice in July. At the old days the cave was used as a fish cellar. According to some sources this ice had remained unmelted for over 500 years. Until the first summer came in 2013 when the ice melted and the cave had to be closed from public for the summer. The effects of global warming to arctic regions are severe.

Grayling is common and spread across the entire Lake Inarinjärvi, and can therefore be caught sustainably here. The best grayling spots are the rocky shallows near the shores as grayling prefers shallow waters. Arctic char can also be caught in the Inarinjärvi, but it prefers deep waters.

Foreign citizens have the same fishing opportunities and obligations as Finns. Angling with a hook and line, ice-fishing and Baltic herring fishing are allowed without any permits by the Fishing Act, except in rapids or some lakes reserved for angling rainbow trout.

State-owned fishing areas where fishing permits are required on top of the fisheries management fee consist of river- and lake-specific angling destinations and larger waterways. By purchasing the permits you are supporting the maintenance and care of the fishing areas and nature conservation. Permits can be purchased online for example from Eräluvat website. For angling in Inarinjärvi you need a permit Lake Inarijärvi 1580.

The minimum catch size in Lapland, above 67th parallel north, for grayling is 30 cm and in the south below the 67th parallel it is 35 cm. For trout it is 50 cm or 45 cm in streams or ponds with no migratory connection from the sea or a lake. The mimimum size for the arctic char is 45 cm in Lake Inarinjärvi.

Where else to catch grayling in Lapland?

I had some friends from the US visiting me last year and as they were really into fishing, I took them to a river. I heard their fishing stories and saw some pictures of sharks and other huge fish, so I was afraid that our potential catch would be underwhelming. Little did I know that the arctic char would have been a very exotic catch for them, and even grayling was something new.

Few examples of rivers where you could get grayling are listed below:

Ounasjoki river is known for arctic grayling and trout. Ounasjoki is shallow and therefore perfect for fly fishing. Torajaisenniva and Riikonkoski are famous fishing locations near Levi, Kittilä. Molkoköngäs rapids are located between Rovaniemi and Kittilä in close proximity to the road. For angling in Ounasjoki you should select a permit called Ounasjoki-Käkkälöjoki-Pöyrisjoki.

Käkkälöjoki river, included in the Ounasjoki permit, is also popular for canoeing and angling as the river has grayling, whitefish, trout and pike. Kalma’s lean-to shelter and Kalmankaltio wilderness hut are located along Käkkälöjoki, providing excellent temporary shelters for fishermen.

Tornionjoki river is a major stream flowing almost in its natural state on the border of Finland and Sweden. The river is most famous for being the largest free-flowing salmon, whitefish and grayling river in Europe. Kukkolankoski rapids are some of the rivers good fishing sites. For Tornionjoki you should select angling permit called Tornionjoki-Muonionjoki-Könkämäeno.

You can also catch grayling by ice-fishing in winter. Late spring is especially good time to go ice-fishing for grayling.

Graylings should be descaled unless you will cook them in a smoker. They are versatile and can basically be cooked in any way, smoked, grilled, fried, cooked in the oven or in soups. Some even cure them in salt.

We barbequed our graylings in a large pan in open fire, and to my embarrassment nearly managed to overcook them with the intense heat. But they were delicious nevertheless.