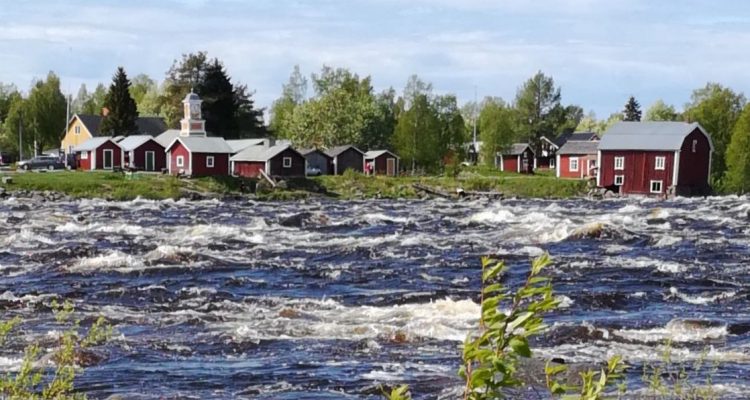 The Tornionjoki river, also known as the Torne or simply as the Way by locals, is a major stream flowing almost in its natural state on the border of Finland and Sweden. The river is most famous for being the largest free-flowing salmon and whitefish river in Europe.

The Tornionjoki river is 522 kilometers long, originating from Lake Torne near the border of Norway, and flowing into the Gulf of Bothnia. It became the border river in 1809 in the Treaty of Fredrikshamn, when Sweden lost areas that on present day constitute Finland to Imperial Russia. Tornio-Haparanda is the biggest border crossing on Tornionjoki river, city of Tornio being on the Finnish side and Haparanda belonging to Sweden. The whole Tornionjoki river valley is a beautiful sight, no matter on which side of the border you are. I sometimes like to drive up north on highway E8 just because of these river valley views.

About 15 kilometers north of Tornio is the village of Kukkola, where the Kukkolankoski rapids are situated. There are many rapids in Tornionjoki river, including the most well-known Kukkolankoski, Matkakoski and Vuennonkoski rapids. I highly recommend you to stop by at this place to see the area and the rapids, even if you don’t care about fishing. There is a little cafeteria called Myllynpirtti, which serves the local speciality, whitefish on the skewer.

The cultural heritage of Kukkolankoski includes the traditional ways of fishing as well as the fishing related buildings on the banks of both countries. Fishing has been the thing at Kukkolankoski for centuries, ever since the river banks rose from the water. People from the river valley travelled south to Kukkolankoski rapids for salmon, whitefish and trout, but massive flooding prevented permanent move into the area. First estates were documented in the 15th century, and at those days people had fields on both sides of the river. The new border in 1809 caused a lot of confusion as people were forced to sell the land on the wrong side of the border and soldiers were guarding the coasts. Soon life settled again until the WW2 stirred the peace in Kukkola. Many Swedes took their Finnish relatives to safety on their side. People at Kukkolankoski and Kukkolaforsen on the Swedish side have remained close despite of the border. They speak common dialect, and have many relatives on both sides. In the 50s even the local football team consisted of players from the both sides of the river, from two different countries, which was somewhat confusing for their opponents. The European Union brought the two villages even closer to each other, and despite of the wide river and powerful rapids in between, the two similar cultures co-exist in great understanding. Today approximately 200 people live in the village of Kukkola.

Salmon arrives in the rapids of Kukkolankoski in June, and so do the fishermen. Trolling for salmon on a rowing boat is the main form of fishing on the river. You definitely need a permit for spinning or trolling the salmon here. The salmon in River Tornionjoki grow big, on the average about 6 to 8 kilos, but they are known to be over 15 kilos.

Whitefish season begins even before salmon at the end of May, and lasts until mid-September. I visited the Kukkolankoski in June, and witnessed whitefish fishing by scooping. It’s a traditional way, which in Finnish is known as lippoaminen. This method has existed for over thousand years in this area. In that the fishermen use 6-meter long rods to catch the whitefish, which are resting on pits at the bottom of the river rapids.

Car: Arriving from highway E8, turn to Koskitie and continue until you have reached the parking lot. There are signs to Kukkolankoski on E8.
Bicycle: There are no specific pedestrian or cyclist roads in this area so you will have to cycle next to the road.
Public transport: There are buses operating between Kemi and Kolari, see the timetables at Matkahuolto website. The closest bus stop is at Kukkola, about 1,9 km walk from Kukkolankoski.

Accessibility: The Kukkolankoski parking lot is located right at the river bank.

When to go: Summer is the best time to visit Kukkolankoski. The fishing season for salmon is on 1st June to 15th August.

What to wear: The number of mosquitoes on the riverside can be extremely high in the summer, so don’t forget the mosquito repellent. In large bottles.

Special to remember: Fishing permits are required, and there are minimum sizes and quotas for salmon and grayling. Trout is protected. All trouts must be released back to water, dead or alive.