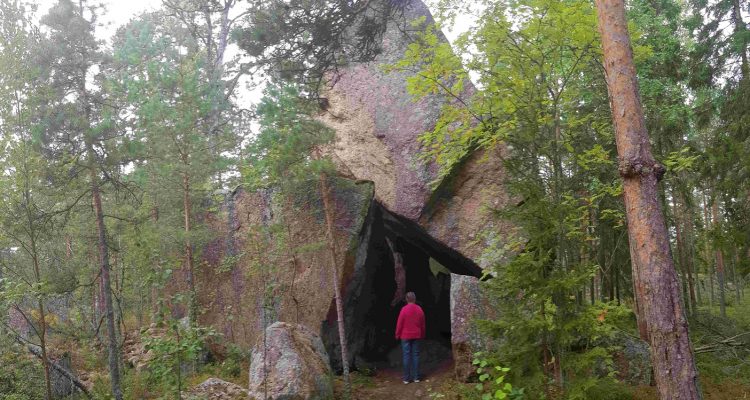 Getting to this rock church in Korsvik, near Loviisa, was a labour of Hercules. This incredible rock formation made us work for the right to see it even though (officially, mind you) you only have to drive on the road and then walk a few hundred meters to reach it. In the end, we defeated “Old Nick” and made it to this “church”.

We were visiting Loviisa, a beautiful and old seaside town only an hour away from Helsinki, when we were advised to visit the rock church of Korsvik about 4 kilometres from the centre of Loviisa. We drove towards the suburb of Valko and passed the Loviisa frisbee golf track on our way towards the rock church. Suddenly another suburb appeared, which confused us because one doesn’t expect houses in the middle of nowhere like that. Then, suddenly the navigator told us to turn to a small gravel road. This road is very narrow so only one vehicle at a time can be on it (So no driving fast, ya hear!).

The road seemed to be doubly built: there was a lane for cars and a lane for runners and walkers. We drove on for a kilometre or so, and then saw huge glacial erratic boulders to our right. There was a carpark of sorts as well so we got out of the car to check if this was the place we were looking for.

The boulders were huge! Green moss and even trees growing on them! But no rock church in sight. Only lamp posts, which we investigated further: this was the Harmaakallio-Valko exercise and skiing track, so that was the reason for the funny dual lane system.

We decided to go back in the car and drive on. But. As soon as we got in the car, we felt a weird tickling sensation… right along the hairline. Deer flies!

Ugh! For those who don’t know what deer flies are (also known as deer keds, Lipoptena cervi), they are a species of biting louses, which burrow through the hair of deer and moose to suck on their blood. Incidentally, even though humans are not their preferred meal, we can be easily be mistaken for food… I mean, moose. These little terrors get everywhere: your hair, the creases of your clothes, everywhere. They are also quite impossible to kill (or so it seems). Thankfully, they mostly only infest forests in August-September, so the rest of the year you only have to deal with mosquitoes. Yay…….

Getting back on track. Once I had screamed a bit in disgust and my mother had nearly died laughing at me, we drove on. This is the point where it got tricky: the Korsvikintie road is apparently a hotly debated private road so it doesn’t always abide by the code of “looking like a road”. We also noticed this when suddenly, the gravel road ended and we were faced with sheer bedrock. “This can’t be the road”, I said. “What if other people like us come here and they don’t have a 4×4 drive!” In fact, that was the road. So, even though I didn’t have a 4×4 car, I slowly crawled my car down this roches moutonnées -bedrock (a common type of bedrock made smooth by glaciers, called silokallio or “smooth rocks” in Finnish). Did I already mention this was a great adventure??

We came to a fork in the road, and our navigator told us to turn left to a private road leading to the rock church. I was sure there would be space to put the car without having to disturb residents so I drove on for about 100m. There, we saw a clearing of the woods and space for about 3 cars and a signpost.

Since I had realised the forests were infested with deer flies, I thanked myself for the foresight of bringing my deer fly jacket with me.

I squirmed into my deer fly jacket inside the car while mom got out of the car and gave me “The Look” (you know, the look that only mothers can give you when they think you are being silly). Despite my silly jacket, we started to walk down towards the shoreline: there was a proper track and it was nicely cleared, too.

The walk was easy and short, and we soon saw huge blocks of rock in front of us: the rock church. Huge slabs of rock piled on top of each other, and a cave where even the world’s tallest person could stand upright without problems. I had read that the slabs are rapakivi granite, an uncommon form of granite common to southern Finland. Fittingly, rapakivi has been used to build many stone churches in Finland, so this natural church-like formation fits right in the same company.

Rock churches such as this one as well as so-called devil’s churches are natural rock formations where huge boulders stand on top of each other. These rocks are often glacial erratics moved by movement of glaciers in the last Ice Age. They can be cave-like formations or canopied sides of cliffs, but almost always they are deeply entrenched to local folktales. Here in Korsvik, three gigantic erratics clustered together to form a church-like structure. The largest boulder is 6m x 8m x 4m, and it forms the roof of the cave. The cave is about 10 square meters in diameter, and it has several entrances besides the “main door”.

Someone had built a wooden cross in front of the church to show how the locals have dubbed it “a church”. Apparently, the local congregation has also arranged some events at this rock church before. Even though popular among locals (which shows), this was definitely a place to visit! Despite the deer flies.

Directions to the rock church

Address:  You can park your car (there is only space for about 3 cars nearby) at a clearing about 300m from the rock church formation.

How to get there: Type Korsviikintie 176 or Korsvikin kivikirkko pysäköinti on your navigator. This is the spot for the carpark. Make sure you don’t go on the private access road because you don’t want to disturb any residents.

Accessibility: The trail is well maintained and accessible even with wheel chairs or children’s buggies. There are a couple of small hills so some muscles are required.

Facilities: There is a fireplace area in the area since it is popular among locals. Remember that you can only use the fireplace when there is no forest fire warning on. There is no firewood on site.

When to go: Make sure you go when it is light: the trek lasts for about 10mins. Otherwise, you can enjoy the place at any time of the year.

What to wear: There are mosquitoes and even worse, horse/deer flies (hirvikärpänen in Finnish but also known in English as deer keds) in these woods. So, unless you enjoy being eaten alive, mosquito repellent is advised. However, humans have yet to invent anything that would work on deer flies so the only way to keep them from your hair is to wear something slippery.

While you’re in the area, also check out the maiden’s dance rock maze at the centre of Loviisa.