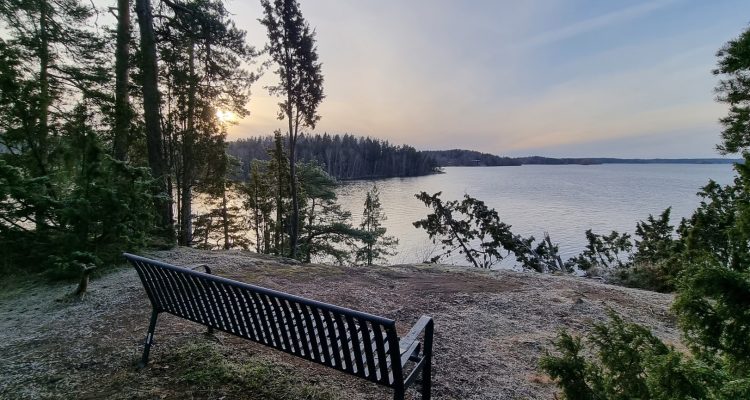 Lahokallio recreation area and its nature trails zigzag across a small peninsula near Lake Lohja. The cliffs on the northern tip of the peninsula have been designated as a nationally valuable rock surface dropping straight down into the water. Near the eastern edge of the lake is a wide and lush nemoral forest where shrubs and leafy trees congregate. On the western side of the peninsula the ground is much more rocky with plenty of glacial erratics dotting the landscape.

I had read great reviews of Lahokallio recreation area at Lohja, so naturally I had to check it out one crispy winter day. There is a small sign at Lahokallionkatu 9 pointing to the nature path, and at first we thought we were going the wrong way since we saw rows of houses. However, the path quickly veers to the right, away from the houses. The signage wasn’t too good when we were there but that was due to the maintenance being done on the trail. We noticed this when we soon came to a fork in the trail and eventually decided to go to our right, towards the western side of the peninsula.

Here, the trail was easy to follow as thousands of feet had rubbed a clear path on the forest floor. Frost and a tiny scattering of snow were visible but the incredibly vivid green of mosses still shone through. We agreed that if Lahokallio is beautiful in the least colourful season of the year, it must be incredible during summertime.

The two sides of the peninsula are very different

Closer to the lake, some duckboards had been built in case of rising lake water levels. There were massive fallen trees, which offered a place to live for many polypores. Some polypores inhabit tree trunks and consume the wood, but some soil-inhabiting species form a symbiotic relationship with trees. The lake was almost entirely frozen even though the ice was super-thin. A father-son team was looking for a good place to fish, and they ended up choosing the northern-most tip of the peninsula as the best spot.

About halfway the peninsula the trail had been relatively good. The northern-most tip became a bit more challenging. In order to get around the tip, we had to climb on top of the cliffs overlooking lake Lohja. To be honest, in the early winter sunshine, the view was magical. I wish it had been a bit warmer so that we could have spent some time sitting on the provided bench and just soak in the atmosphere.

The western side of the peninsula was clearly more difficult to walk on. The trail pretty much disappeared and we were hopping from one jagged rock to another. Of course, we could have just retraced our steps further into the woods and followed another trail. But no, we wanted to go around the entire peninsula.

At the neck of the peninsula was a lovely sandy beach where I’m sure plenty of locals spend warm summer days. There were also a few massive glacial erratics which had been deposited there by the last Ice age.

Eventually, we found the “origin” of the trail: a tiny notice board with a rough map of the main 1.5km nature trail. We checked our phone’s tracking map, which told us that the walk around the peninsula had been about 4.4km total from Ojamo school. It hadn’t felt as much because the nature around us was so vibrant and inviting. We’ve already decided to check out Lahokallio in the summer just to compare notes!

Vibrant flora and fauna at Lahokallio

The nature trail was founded at Lahokallio in 1991. The nearby Ojamo school and its students use the trail as an educational tool to teach about biodiversity. Especially remarkable is the birdlife at Lahokallio: the tawny owl (Strix aluco) can be found here as well as the endangered lesser spotted woodpecker (Dryobates minor). We even managed to spot the lesser spotted woodpecker! Sadly, no picture.

Even though Lohja is an still industrial town with mainly mining and forest industries, its nature has some unique characteristics. It has significant limestone deposits, and some Salpausselkä terminal moraines run through Lohja. Terminal moraines were created during the last Ice age when debris pushed forward by the glaciers stopped and were deposited as a ridge along the glacier’s edge.

Accessibility: Some of the trails are more accessible than others.

When to go: You can visit the trails at any time of the year. However, please note that especially the cliffs will get dangerously slippery in the winter. The area can be a bit muddy so check the weather and try to wear boots that can handle mud and a bit of water.

Facilities: There are no specific facilities at Lahokallio. There are lots of cafes and shops nearby as you are close to Lohja centre.

Map of the Lahokallio trail

Since you are at Lohja, you can check out the giant’s kettles at Talvia or the cup-marked stones nearby.