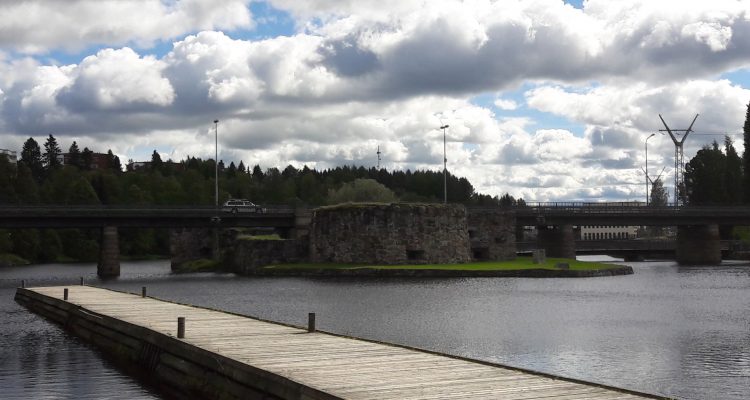 One great reason to stop for a walkabout in the town of Kajaani is the area of the river: both the ruins of the Kajaani castle as well as the tar canal locks are located next to it. We were on a roadtrip, driving from South of Finland towards Lapland, and had already stopped in Kuopio to admire the views from the famous Puijo tower. We needed another quick break to strech our legs after two hours drive and this historical place in Kajaani was the perfect place for it.

Kajaani is known for Kajaani Castle ruins, and this area provides a perfect setting for a light stroll on a sunny day. The Kajaani Castle was built in 1604-1619 to stabilise the Lake Oulujärvi region and to supervise the vital waterway River Kajaaninjoki. The city of Kajaani describes the destruction of the castle as follows:

“The Russian beat the Finnish army in the battle during the Great Northern War in 1714, a period also known as the Great Wrath. The Russians destroyed parts of Kainuu Region in order to invade Kajaani, too. The Chief of the castle heard about their plan, however, and warded off the first attack.  In December 1715 Commander Tshekin arrived with his cavalry of 4,000 men. The Russians laid siege to 50 rangers and approximately 70 women and children in the castle for about 5 weeks. Finally (24 February 1716) the residents had to surrender as they had lost men to battle. The people in the castle were imprisoned and taken to Siberia. The castle was vacated and blown up. Only the stone ruin of the castle remained but even that was gradually destroyed as the locals picked up rocks for the foundation of their houses.”

History of the tar canal locks

Tar was used a water repellent coating for boats, ships, and roofs and it was also a panacea in Finland. We have a saying “if sauna, vodka and tar won’t help, the disease is fatal”. Tar was mainly produced and traded from the 16th hundreds to 18th hundreds when colonial powers had impressive navies and trains and railways were yet to be invented. Today tar is being used for example in candy, alchohol, ice cream and even as a sauna scent.

Back in 18th hunderds, tar barrels were transported from Kuhmo to Oulu along the River Kajaaninjoki. The river had large rapids, Koivukoski and Ämmänkoski, which formed obstacles for the oarsmen rowing the tar barrels. The rapids were too powerful and the barrels had to be transported by horses, which was expensive. Wooden boat channels had been built in 1820 but they were considered unsafe. In 1825 the Emperor of Russia, Alexander I, gave permission to build canals in the rapids of River Kajaaninjoki. The construction begun in 1836 and the canals were completed 11 years later.

Up to 24,000 barrels of tar were shipped through the canals per year until 1915. Then the Koivukoski lock was teared down and the Ämmäkoski lock was filled up with soil. The tar canal was reopened in 1984. Lock-keeper’s cottage is located in close proximity to the canal.