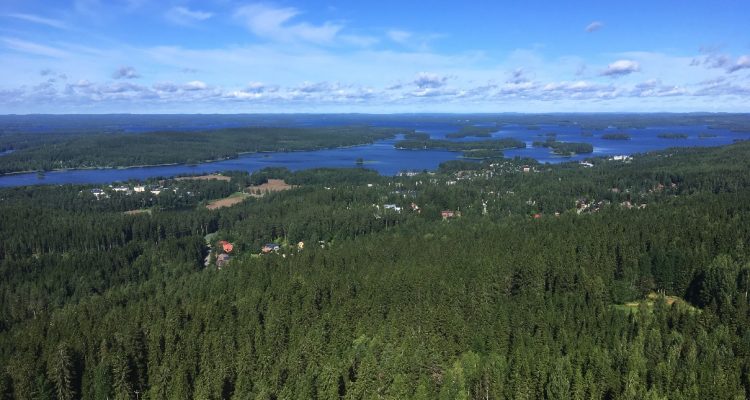 They say Finland is an expensive country, but I would pay 6€ for this view any day. The view from the Puijo Tower in Kuopio, Eastern Finland, is spectacular!

The Puijo Tower is located only 3km from the Kuopio marketplace. It is accessible by walking but it is recommended to drive there because of the climb to the hill. You can buy tickets to the elevator at the entrance of the tower, which also serves as a souvenir shop. There is a discount for students, who pay only 4€. Approximately from the end of October you are not allowed go outside anymore due to strong winds and slippery floors, but even from behind the glass the view is amazing. There is a reason why Finland is called the land of a thousand lakes. Lake Kallavesi, which spreads around the City of Kuopio as seen from the tower, is part of the Iso-Kalla lake area, covering a total of 890 km².

Up in the tower you can not only enjoy the view but also Finnish cuisine at Tower restaurant and cafeteria. Save entrance fees by making a table reservation in advance. The restaurant is rotating 360 degrees per 1 hour, so you won’t get dizzy but you get to enjoy these views to all directions.

History of the Puijo Tower

Current tower is the third one in this hill over the years, being built in 1963. The first tower was built in 1856 and the second one in 1906. The current tower is 75 meters tall, rising 224 meters above the Lake Kallavesi and 306 meters above the sea level. Building the third tower in the 60s was a significant effort by the City of Kuopio and other parties involved. It immediately became a tourist attraction and it is visited by some 80 000 people every year.