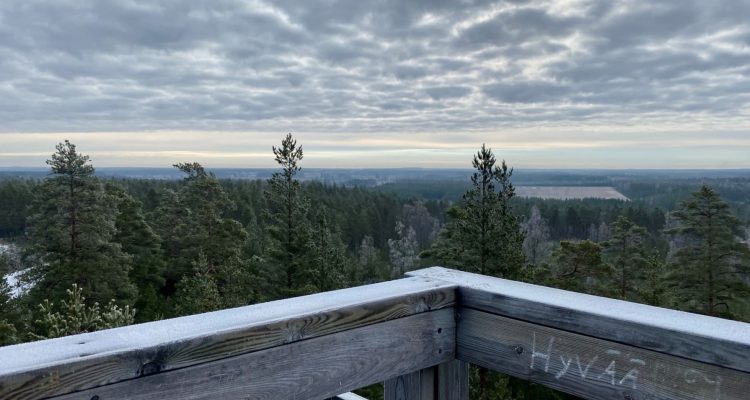 Hevonlinna is a peaceful little outdoor sports center in Koski Tl municipality in the Southwest Finland. It is located about 60 kilometers from Turku near route 10, which is going from Turku to Hämeenlinna. The nature around the area consists of many hills as this esker was created by the ice age. Hevonlinna is known for its disc golf and skiing tracks, but it is also a good place for hiking and stairs workout. As there was no snow in the ground, I was able to take my dog along with me when I visited the place in March.

Koski Tl has that weird abbreviation Tl in its name as there used to be two Koski municipalities, one in the old province of Turku (Turun lääni in Finnish, thus abbreviated to Tl) and another one in Häme. The other Koski in Häme used to be called Koski Hl but it changed its name to Hämeenkoski in 1995. Koski Tl remains as the official name for this municipality. Koski Tl has roughly 2000 inhabitants and the centre is located about 7 kilometers from Hevonlinna, on the other side of route 10.

Hevonlinna esker is the work of the ice age

Hevonlinna is located in the middle of the beautiful pine forest. The ridge area is part of Säkylä-Mellilä esker system, which is a remarkable glaciofluvial formation. The area was deglaciated at about 9800 years BP ago. The melting ice generated rivers that contributed to the formation of this esker. Hevonlinna is actually the oldest and topographically highest shore line in southwestern Finland belonging to the Yoldia phase of the Baltic Sea. The steepest hills were slightly intimidating, and I was suddenly glad I wasn’t here with skis on.

Hevonlinnanjärvi is a small lake in the middle of the recreation area. It is a suppa depression, a kettle hole lake, which is formed as a result of ice block left behind by retreating glaciers. The ice block became buried by sediments and when the ice melted, the kettle hole was left. That hole was filled by water, forming the lake. Hevonlinnanjärvi would be suitable for swimming in the summer, but now it was covered by a thin layer of ice.

Hevonlinna esker is a significant water table area, and its gravel is also well utilized. That means that the area is somewhat ravaged by gravel pits. I have to say that traces of human are less fascinating to admire than the traces of the ice age.

One pretty cool reason to visit Hevonlinna is the observation tower, which allows you to observe the scenery of this esker above the trees at about 20 meters from the ground. It seemed high to me, or maybe I’m just getting old! Clouds were hanging low and the wind turbines in a distance were at complete standstill. No wind in the air.

The lean-to shelter was next to the observation tower. It had toilet facilities and some firewood available. This location is popular by the local scouts and we saw a group of them arriving with backpacks when we departed.

How to get there: The best way to get to Hevonlinna is by car.

Accessibility: Hevonlinna area is accessible to people travelling with children’s buggies or those in wheelchairs but the ground may be soft. The trails in the area are used for skiing tracks in winter so they are very wide. There are many steep hills in the area.

Facilities: There is a toilet near the lean-to shelter and observation tower. There is a barbeque hut also in the parking lot.

When to go: Hevonlinna can be visited any time of the year. Dogs are not allowed on the skiing tracks in winter without skis.

Marttila wilderness trails are also located close to route 10. There are several trails and lean-to shelters in Marttila, and the main sights along the trails include big boulders called Juomakivi and Isokarhunkivi, views from Mopokallio and Rajakallio, and a narrow gorge and cave called Lotikonkellari.