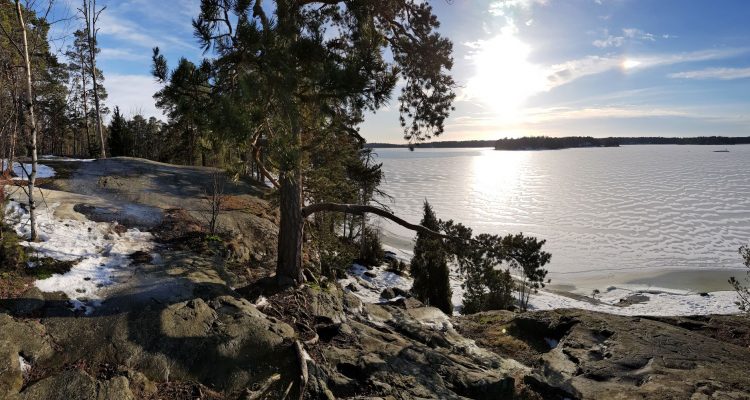 Uutela is an urban outdoors area in the eastern part of Helsinki easily accessible to everyone. Whether you look for more challenge on your trail running or hiking, if you want to go bird-watching, or whether you just want to barbecue some goodies for yourself on an open barbecue area, Uutela is the place to go.

I decided to take a leisurely stroll in Uutela on a sunny Sunday afternoon. It was the end of February and unusually warm for the time of year (it was +2C and it should be around -15C), so I knew everyone would be out enjoying this miracle. However, despite the warmth, sunshine, and a partially open sea, I was glad to be wearing my anti-skid, studded sneakers. We may sometimes be optimistic in Finland when it comes to weather but we’re not stupid (it’s called a fool’s spring for a reason).

I started by admiring the wonderful views from the marina and a small island point next to the bay. The actual trail starts after the boat harbour and a cafe: you can go around it either way. I decided to go around anti-clockwise so that I would stay in the sun all the time.

There are two trails that form an 8 in Uutela: the one closer to the car park is 2,5km, the one next to Särkkäniemi nature reserve is 1,5km in length.

As soon as you step on the official path, you see several dozens of unofficial trails going into the forests and cliffs next to you. You can also follow the smaller paths but they are unofficial… so make sure you don’t destroy any vegetation and make sure you don’t accidentally injure yourself. I used the Helsinki city map to follow the trail but there are also signs and white-green markers. Because Uutela is situated right next to the sea, you see the gleam of the sun reflecting off the waves all the time. If it had been warmer, I would probably have stopped, taken off my shoes, and just relaxed with my feet in the water.

There are two cooking shelters in the area, and I managed to arrive just as someone else had left. The warm embers of burning wood were still smoldering in the firepit when I arrived … and of course, took full advantage of the heat and the wonderful smell of burning wood. I could nearly taste the ‘smores…

About halfway of the first, longer track is a community garden with flowers, vegetables, and the lot. Those not familiar with the idea: these are private lots tended by private citizens so please don’t take/leave/destroy anything. Soon after the allotments you find yourself by an old farm called Skatan tila (Skata’s farm) where you may bump into horses (and earlier on, cows). The farm is also a private property so enjoy its lovely old-fashioned facade from a distance. I continued walking past the farm, after which the road turns more into proper dense forests.

Soon the trail opens next to the sea by Särkkäniemi, a nature reserve with duckboards and lovely smooth rocks by the beach. In the summer, this area is full of flowers bravely growing on this rocky bit of beach meadow. I, however, visited the place when the sea ice was breaking; no matter when you visit, this nature reserve area is worth stopping in.

The shorter trail starts from Skatan tila, has its halfway point at Särkkäniemi, and then leads back to the farm. I quite enjoyed that, while in Uutela, you never have to walk on the driveway; there are always pedestrian trails about. After Särkkäniemi, the trail even went up the hill into the forest again, where there were more things to see: there the pines were tall and strong whereas just a few moments before I had been next the sea rolling against a beach meadow. One thing I specifically noticed was how many snag trees dotted the landscape: a snag is a dead or a dying tree that has lost most of its bark. They provide food and habitat for hundreds of species, but they are sometimes cleared in fear of them falling on people.

My walk didn’t end up being too leisurely because I managed to pick up a bit of a sweat exploring all the nooks and crannies of Uutela. I was also very glad I had taken my studded sneakers with me because some of the more shady areas were still quite icy. I rewarded myself with a cup of hot chocolate at the marina cafe while overlooking the lovely vistas over the Baltic Sea. An extremely good way of spending a Sunday afternoon.

Address: Type Urheilukalastajankuja, Helsinki on your navigator. It will take you to the car park area nearest to the Uutela trails. There are some other, much smaller car parks closer to the trails as well.

How to get there: You can get to Uutela by car, by bicycle, and by public transport.

Accessibility: The area is generally very accessible so you can go around in a wheelchair or have a buggy for children. Some parts of the trail have some roots but it is easy to choose a path that is more accessible.

When to go: You can visit the area at any time of the year: Uutela trails are suitable for every season.

Facilities: There are two free-to-use cooking shelters but you will have to bring your own firewood. There are also two outhouse-toilets in the area.

Special to remember: If you want to swim in the area, check it doesn’t have blue-green algae in it as it’s a health hazard to humans and animals. The Lake Wiki shows up-to-date algae info. Also note that this area is not safe for ice swimming.
Also bear in mind that there are some private areas in Uutela as well. Everyman’s rights do not extend to these areas.

Since you are already in the area…

There is also Mustavuori fortress area in Vuosaari. Also check out Meri-Rastila and the beautiful bay trail with glacial erratics and devil’s fields.