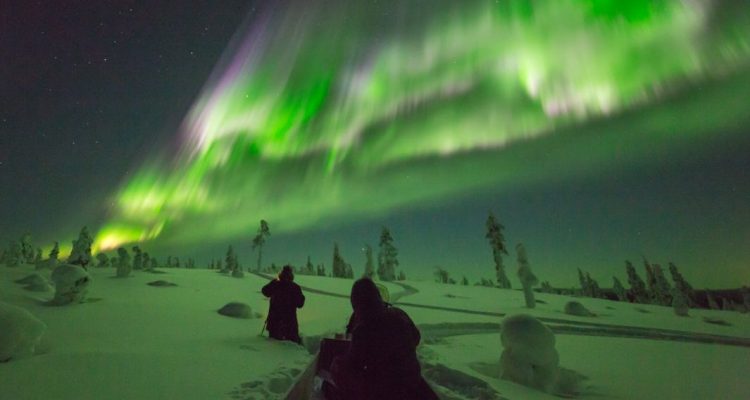 Northern Lights, aurora borealis, are a wonder of nature that only few people get to see. We want to help everyone enjoy these stunningly beautiful apparitions so here are some tips on when, where, and how to see Northern Lights.

Northern Lights are created when the high-energy particles created by solar winds crash together with the atoms in Earth’s upper atmosphere. These high-energy particles, usually electrons, may create photons (= light), which them light in different colours according to what gasses they interact with and how much energy the particles have.

Auroras: when and where?

In places like Finland, anywhere above the Arctic Circle (above 66° parallel North), the Northern Lights can be seen most frequently. The only time when you can’t really see them is when the Arctic is experiencing the Midnight Sun: this is the time when the Sun doesn’t set below the horizon and it’s basically constantly light. The higher up North you go, the longer the Midnight Sun lasts; in Rovaniemi (66°) it’s between 6.6.-7.7., but in Levi (68°) it’s between 26.5.-17.7.

The best times to see Northern Lights is when the sky is dark enough and there is as little light pollution (city lights etc.) as possible. Kaamos or the polar night is a time in the middle of the winter when the Sun doesn’t rise above the horizon, meaning it’s either pitch black, light dawn or light dusk all the time. Once again, the higher up North you go, the longer the polar night lasts: in Rovaniemi (66°) the Sun does rise even during the darkest times, but in Levi (68°) polar night is between 9.12.-3.1. Polar night is great time for catching auroras because it extends the time frame to up to 20h in a day.

However, celestially thinking the best seasons to see auroras is around the autumnal and spring equinoxes, meaning September and March, respectively: these are the times when the Earth’s position to the Sun enables auroras the most.

A good service catching the elusive auroras is the Auroras Now! site, which is a space weather service maintained by the Finnish Meteorological Institute (FMI) to help watching auroras in Finland.

Watching Northern Lights doesn’t require any specialist equipment. If you are peering at the sky during the winter, make sure you wear plenty of warm clothes because perfect aurora weather means clear skies and bone-chilling temperatures. An age-old tradition of enjoying the Northern Lights without having a sore neck the next morning is to simply lie on your back in the snow. If you’re enjoying the auroras in a place with no snow, a good place to go is higher up: the top of a fjell or a mountain is perfect but also a large woodless area like the shore of a lake is good because you can then look into the distant horizon without straining your neck.

When you settle to watch the auroras, make sure you are warm enough. The best places for watching also tend to be open places with plenty of wind. When you are settled, make sure you switch off all light sources. Northern Lights can be faint and fast, so all extra light makes it harder to concentrate on them.

The most important tip we can give you is to take your time. If the forecast predicts Northern Lights, make yourself comfortable and warm, and just wait. If you do manage to see Northern Lights, then allow yourself to enjoy them in peace and quiet because they can even talk to you.

Taking photos of the Northern Lights

Taking pictures of any heavenly bodies can be tricky. It’s pretty safe to say that taking photos of aurora borealis requires patience and preparation. We’ve gathered some good tips on how to get the best photos of Northern Lights (and it has to be said that even with our experience, they still don’t always work out).

Camera and its settings

Place where you take your photos

How to take photos of the Northern Lights

All the good pictures of Northern Lights are by our blogger Guy (Guy Geffen). Read more about Guy’s arctic adventures, from the depths of frozen Lapland to the shores of the icy Norwegian sea or Iceland: facebook.com/guynorthernexposure/ . The rest of the photos are by Tarja. So, watch and learn what not to do from them.