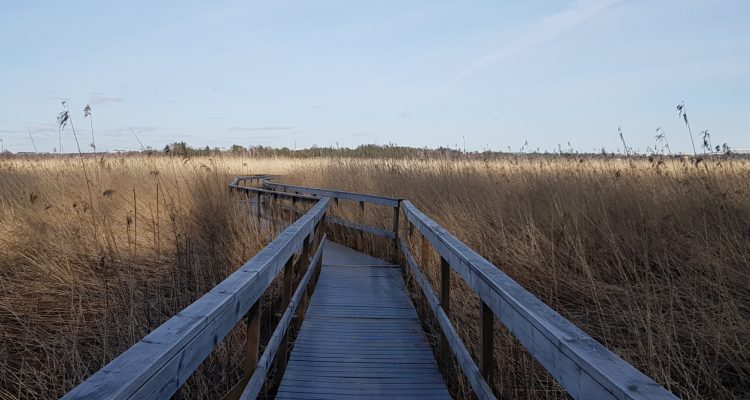 Laajalahti Bay is one of the best areas for bird-watching in the capital area. Several nature paths surround the bay, and at their centre is a specialised nature house, Villa Elfvik. This nature reserve is a great hiking destination all year around, and it is popular among locals.

There are seven different nature paths along Laajalahti Bay. Because the area is a nature reserve, it is important to stay on the marked paths. Otherwise, you may end up disturbing nesting birds and the valuable bay area habitat. However, if you feel adventurous in the winter when the bay is frozen solid, you can even explore the views from the middle of the bay! You can, of course, also just follow the waterfront walkway (rantaraitti) or the waterfront footpath (rantapolku) if you just want to enjoy the scenery.

Check out our solar system

Near Villa Elfvik is a very special gazebo with a model solar system and the planet Uranus, placed there by the Ursa Astronomical Association. In 1992, Ursa built this solar system model at 1:1 billion scale. That means that 1m in nature equals 1 million kilometres in space! The centre of our solar system, the Sun, is located at Patterimäki hill at Pajamäki. The four first planets, Mercury, Venus, Earth, and Mars, are all within 200m of the Sun model.

The Laajalahti Bay area is excellent for bird-watching, no matter the season. There are several paths and watch towers overlooking the open water. The widespread reed and grassy patches are important to the wide variety of birds nesting in the area. April-May and August-September are the best times to grab your binoculars and head out to count how many species you can spot. The bay area has been made a protected area especially to conserve the shallow bay and its wildlife. In order to maintain the grassy areas naturally, cows and other herbivores graze along the bay.

Ruukinranta is one section of Laajalahti Bay, and it gets its name from a factory area that stood there in the 18th century. The history of Ruukinranta is closely tied with the nearby Alberga mansion at Leppävaara because in 1749, lieutanent commander Carl Tersmeden bought the mansion. He then proceeded to build a brick factory on the seashore, along Laajalahti Bay. The brick and faience factory operated at the site from 1755 to the 1860s. In fact, Ruukinranta is named after this factory since ruukki is the Finnish word for an early industrial ironworks site (etymologically from the Swedish work ‘bruk‘ for factory).

After its factory beginnings, Laajalahti and Ruukinranta became well-known for attracting artists. If you had been there in the late 19th or early 20th centuries, you would have met some of Finland’s most famous artists, even nobility. Laajalahti was famous for its villas at the time, but unfortunately, very few survive until today. Painter Akseli Gallen-Kallela (1865-1931) designed his atelier-castle Tarvaspää at Ruukinranta, and it now serves as a museum. Similarly, famous sculptor Ville Vallgren (1855-1940) and his wife, fellow sculptor Viivi Paarmio-Vallgren (1867-1952) also lived at a villa at Ruukinranta.

Accessibility: There are a lot of accessible routes around Laajalahti Bay.

When to go: Laajalahti and its surroundings can be visited at all times of the year.

Facilities: Toilets and water fountains are available only when Villa Elfvik and its nature house are open (check times here). A café is usually open during the weekends.