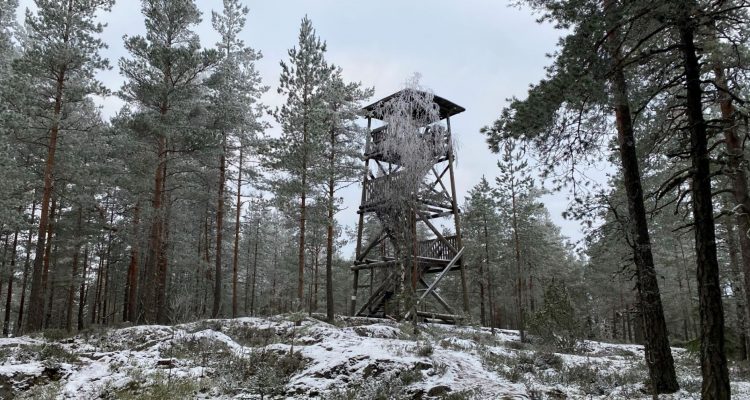 Korkeusvuori observation tower and Kettukallio lean-to shelter in Loimaa were our choice of nature destination in the beginning of January. Korkeusvuori could be directly translated as high altitude mountain, which is some exaggeration as this place hasn’t seen high altitude anymore than mountains. But it was still a lovely nature destination to visit on a frosty morning. This place is also known as Kojonperä or Kojonkulma, as it is located in Kojonkulma village.

Loimaa in general is a flat area with a lot of agriculture. The name Loimaa actually originates from word Loima, which means valley. When the ice from the latest ice age melted in this area, Loimaa was mainly under the sea water. When the melting ice water with clay sediments mixed with salty sea water, the clay particles got attached to each other, grew bigger and dropped to the bottom. This formed a large clay valley that shapes the area even today.

Korkeusvuori nature trail makes a circle in the forest

The nature trail around the observation tower is less than 3 kilometers long. It says 3,2 kilometers in the information board but I think it is actually less than that. The walk to the lean-to shelter and back adds another few kilometers to the total length of the trail.

The beginning of the trail was what seemed like a lovely blueberry forest. My dog Nalle would rather call it a deer forest. There was very light snow on the ground and frost on the trees. The first sign directed us to turn to left from the forest road, which actually continues straight. We did. Keep following the signs and yellow markings on the trees and you won’t get lost, as this trail is well marked.

Pretty soon we arrived to the intersection where you can decided which way you want to go. We walked the nature trail anticlockwise, but it doesn’t matter which way you go. By walking it anticlockwise you will arrive to the Korkeusvuori observation tower fastest.

I climbed the slippery steps carefully to the tower. It has probably had better views when it was built and the trees around it weren’t that high, but I could still see some fields in the distance. The frosty trees were breathtakingly beautiful.

In front of the tower there was a huge picnic table and open fire place with some firewood available. The trail continued down from Korkeusvuori hill and briefly to the forest road, before we entered to the forest again to the right. Then we came to a small stream and jumped over it.

After the stream the trail does a little loop and crosses an area which looked like someone’s lot. Perhaps someone has been planning to built a cottage here since there were some construction materials waiting. The trail started climbing slowly towards Metsokallio. Metso means capercaillie, perhaps you can spot them here.

From the Metsokallio we came back to the intersection. Nalle wanted to go another round on the trail but I opted for the lean-to shelter. We grabbed our lunch sandwiches from the car and headed to the Kettukallio.

The Kettukallio lean-to shelter stands sturdy in the forest

The Kettukallio lean-to shelter had an interesting looking fireplace that was made from an old car rim. It even had a hole in the lower section to allow the fire to get some oxygen. Perfect way to reuse the rim. We didn’t need to set up any fire here, but you could do that after checking that the forest fire warning is not on at the Finnish Meteorological Institute’s website.

Car: Korkeusvuori parking lot is located 3,3 kilometers from Kojonperäntie road. You must turn to Kuninkaistentie road and cross one bridge. The road goes through fields and there are few turns (first right and then left), but there are signs to the nature trail along the way. In the forest you will see a sign to the lean-to shelter on the right and the observation tower to the left. You can turn left and continue few hundred meters to the parking area, where you will find trails to both directions.
Public transport: You can get to Kojonkulma by bus from Loimaa but there are only few buses per day. The closest bus stop is called Kuninkainen, located in the intersection of Kojonperäntie and Kuninkaistentie. Check out more at Matkahuolto website.

Accessibility: There are no services for the disabled in the area, but the area is suitable for families with children.

Special to know: You should note that this area is in active use by the local hunters. There are many deer hunting cabins in the area.