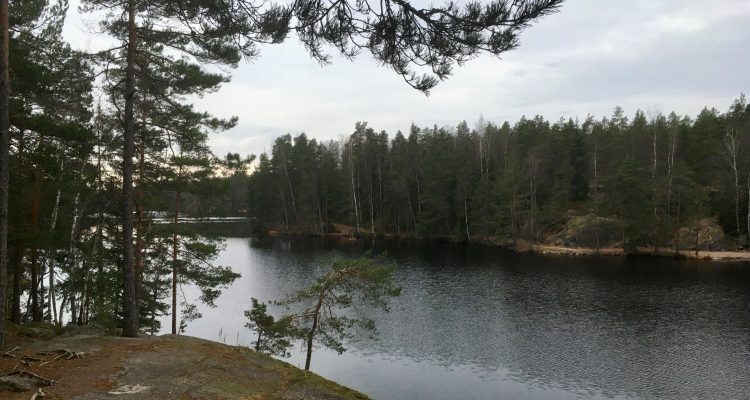 Kaitalampi in Espoo is the perfect forest area to escape the hustle and bustle of the capital area in Finland. Only about 35 minutes from Helsinki, Kaitalampi lake in Luukki recreation area provides nice trails and cooking shelters for spending a day outdoors. Instead of just marked trails of Luukki, I wanted to explore and walk around Kaitalampi lake.

I drove to Kaitalampi early on one Saturday morning, but you can easilly reach this nature destination also by bus. Instead of heading to Luukki village, I passed it and parked the car in a parking area called Kaitalammenpää. Since I planned to walk around the lake, this was the best parking lot for it. There is a trail around the lake even though it is not in the official map of Luukki. I headed first to the official section of the trails, meaning that I was walking around the lake clockwise. It doesn’t really matter which way you walk, but I found it easier to follow the official trails (marked with red and yellow in the map) at first.

The official trail was wide and accessible, passing Kaitalampi and Kaitalammenlahti cooking shelters by the lake. Early in the morning there wasn’t anyone else. It was quiet in the nature, but few airplanes flew over the area very loudly, reminding me of being close to Helsinki-Vantaa airport. There was also a nice swimming area at Kaitalammenlahti, but at this time of the year it wasn’t even remotely tempting activity for me. (It is for some!) I continued walking on the official trails and decided to go check out a viewing point along the way (näköalapaikka in the map).

The viewing point takes you to a higher ground, which kind of opens up to a forest scenery towards the Luukki village. I particularly liked this location, it was so peaceful in the morning. It wasn’t going to be a very sunny day, but fresh air in the forest was all I needed.

From the viewing point I continued to Kaitalamminsuo, the third cooking shelter by the lake. I still hadn’t seen anyone else on the trails, and I was wondering if it will get busier later on. It was Saturday after all. Just when I began walking on a smaller unmarked trail departing from the last cooking shelter I heard couple of fishermen talking quietly on the shore. I wasn’t alone anymore.

I didn’t know exactly how this unmarked trail was leading me around the lake as I didn’t carry any map with me, but I could basically see the lake on the right all the time. The unmarked trail wasn’t that wide and accessible anymore, in fact it demanded climbing and descending some slippery rocks and hills. I enjoyed this part of the trail more than the flat and easy part near the cooking shelters. I ventured further on the trail, towards the south end of the lake.

Kaitalampi is a very deep and narrow lake, and there was a small stream at the south end. In spring this area might become more wet, but right now it was easy to step over the little streams, and one of them even had a small wooden bridge. The ground became even steeper on the west side of the lake, where the forest is protected. I could see the fishermen on the opposite shore of the lake.

Soon the trail got wider again, and I could see many other people coming to enjoy Kaitalampi area and also lighting fire at the cooking shelters on the other side. People had their dogs on the leash as they should, and some were carrying fishing rods, obviously hoping to catch some lunch. The rest of the trail was flat and easy, and I reached the parking lot quickly. In total I had walked about 4 kilometers. My early morning walk around Kaitalampi lake had been so nice and peaceful.

How to get there: You can get to Kaitalampi by car, by bicycle or by bus from Helsinki, Espoo and Vantaa.

Accessibility: The nature trail on the eastern side of the lake leading to the cooking shelters is suitable for wheelchairs and children’s buggies. The trail around the lake is more challenging and cannot be accessed by wheelchairs.

When to go: I recommend visiting this area for hiking when there isn’t any snow on the ground. The lake is popular for swimming in the summer.

Special to know: Fishing is very popular in the Kaitalampi lake. There are pike and perch, and apparently rainbow trout and whitefish are planted to Kaitalampi on a yearly basis. I have heard some stories about large carp in this lake too. You do need a permit for fishing with lure. The permits can be purchased at Shell Lahnus Lahnuksentie 2, 02970 Espoo, and restrictions apply.