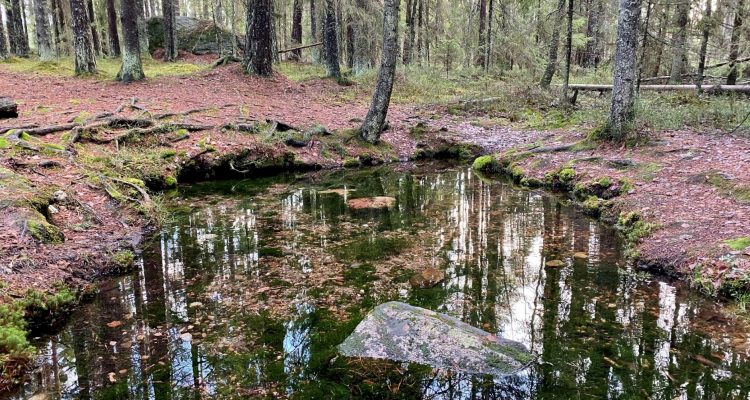 Salainen Uhrilähde is a hallowed spring located in Salo municipality in south-western Finland. It’s real name is Someroja natural spring, but it is commonly known as Salaisten Uhrilähde. Uhrilähde means that the spring used to be a sacrificial place. People hoped to get rid of illnesses by tossing sacrificial coins to the hallowed spring and used its holy water to bathe the illnesses away. Salainen actually means a secret in Finnish, so the name Salainen Uhrilähde would directly translate as the secret sacrifice spring.

Legends of the Salainen spring

I have a relative living near Salainen and he was happy to come meet me at the Salainen spring and tell me more about the history of the place. The spring is on a private protected area, but there was a time when it was a trashy site and some youngsters had even poked the spring with sticks. Now the surrounding of the spring is clean but worn out. Several different species of moss grow near the water.

The water is gushing from the ground with quite a force since there is a loud little stream flowing down from the spring. Natural springs are always beautiful nature sights to visit as there is something fascinating about them. Fresh, clean water bubbling from the ground. We tend to take clean water for granted, but we certainly shouldn’t. The Someroja spring is small but exceptionally beautiful with crystal clear water.

You can see few coins at the bottom of the spring. The healing powers of the water were believed to be especially powerful on eye, stomache, and skin illenesses. Coins or needles were tossed to the spring and the water was drank or massaged directly into the problem area. But the legend says that if you were to rob a coin from the spring, you would to get that coin’s illness on yourself. One little boy stole a coin from the spring and got sick after that. His parents made him return the coin and that healed him.

Apparently there are at least 37 hallowed springs in south-western Finland. One of the most famous ones in addition to this Salainen Someroja spring is Kupittaa spring in Turku. It has documented history from the 17th century. In 1649 a student called Petrus Magnus Gyllenius wrote in his diary that they gathered around the Kupittaa spring to celebrate midsummer festival, gave some sacrifice to the spring, and had a bonfire. Eventually the city guards came and ended the party as it wasn’t appropriate.

A small nature trail through the forest

Next to the spring there is a large boulder that used to be a sacrifice rock. I noticed there was a nature trail departing from the boulder, so I decided to follow it and see where it leads. It first lead to a forest that had recently been cut down. Then the trail crossed one road where I could see some wind turbines in a distance, and continued again into the forest. Soon I came to a large caravan area, so obvisouly their visitors use this trail to visit the spring.

How to get there: The Salainen Uhrilähde is located on Salaistentie 962, Salo. The trail departing from the sign by the road is unmarked but clearly visible and only about 300 meters long. The trail splits up into two, and I recommend you to walk on the left side to avoid the most muddy parts along the trail.

Map below has the parking area at the top along Salaistentie road. The protected area is marked with green and I have drawn the approximate trail to the spring and to the nature trail. The nature trail looks like it ends in the forest but it actually continues over Kivikujannummi until the yellow area, which is Salakallio caravan area with few small ponds.

Accessibility: This place is not accessible for all. The trail to the spring from the parking lot is short, but it can be muddy.

When to visit: The spring remains open all winter but the trail won’t be cleared from the snow.

Sharing our favourites of #Finland on #finnishnatu

Foraging for the most common mushrooms in Finland

Deer keds (Lipoptena cervi) are usually found on deer, elk and moose, but occasionally bite humans and domestic mammals. They are those annoying little insects that fly directly on to…

Having four distinctive seasons is definitely a huge benefit for those living in Finland. Every year in the autumn we enjoy our third colour explosion of the year when autumn…