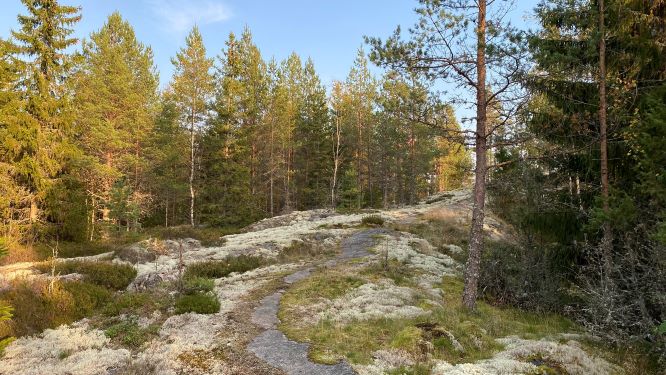 Bergvik manor and its nature trail in Kruusila village in Salo municipality in Finland has been on my list of interesting nature destinations for a long time. Finally I had a chance to visit it on a sunny autumn day. It is always fun to go to a nature trail that you haven’t been before. You have no idea what is waiting for you behind each corner and hill. Turned out this nature trail had plenty of corners and hills!

I drove to Bergvik Manor and activity center, which was easy to find. When arriving to Bergvik, I turned left at an information sign instead of driving straight to the Manor. I had spotted a parking lot on the left. And on the parking lot I saw the first wooden sign directing towards the nature trail. It’s not always this easy to find the new nature trail you are heading to. The wooden signs were directing me and my dog Nalle to walk along the dirt road for a while, before the first sign pointed towards the trail on the left in the forest. It had red and yellow paint on it, indicating that this was the way to both trails.

The beginning of the trail followed an old stone fence and immeadiately took me back in time and got me wondering what kind of history this area had. The Bergvik Manor was formed as its own estate in 1796. The manor has had several owners in the past. Today the Manor is run by the religious Bergvik Foundation, which was founded by Riitta Pätiälä-Saarisalo and her husband Aapeli Saarisalo, both now buried in the manor’s garden. The foundation organizes events and provides accommodation in some cottages within the estate.

There were many steep hills, and I would classify this nature trail from intermediate to hard. The signs as well as yellow and red paint dots were easy to see along the trail. The trail itself wasn’t really used that much, I could even see moose hoove prints along the trail instead of shoe prints. I had a feeling there hadn’t been many hikers on this trail, so I was almost expecting to see a moose at any moment.

The lean-to shelter was large and the area surrounding it was free from any trash, which is always nice to see. I sat down for a while to enjoy the fresh air. It never ceases to amaze me why national parks have crowded parking lots but trails like this are totally empty on a beautiful weekend like this. I’m not complaining, I loved having this place all to myself! But this is one of the reasons why we started this website in the first place. We wanted to share also less known nature destinations, so that people would know there is so much more to see than only national parks.

The lean-to shelter was built on top of a hill in a pine forest, and from here I had two options. I could go back to the red trail and continue that or choose the slightly longer green trail to Rajamäki hill. Since I had no clue what either of the trails had to offer, I decided to stay on the red trail. Maybe I will have chance to come check out the green trail some other day.

This nature trail provided plenty of hills with views over the forests and some even to the Hirsijärvi lake. When we climbed up to one hill, I could hear something moving in the forest. And Nalle probably heard it way before I did. When we got to the top, I spotted 2 beautiful white-tail deers standing and staring at us. Nalle badly wanted to go after them, and I was happy I had him on the leash. And about second later I kind of wish I didn’t, because he pulled really hard after the deers and I had to hold on with all my strength. Eventually he managed to get over the escaping deers and we continued along the nature trail.

This nature trail provided surprises after another. Descending one hill led me to a beautiful birch forest. There were mushrooms, especially milkcaps, everywhere. I did see some parts of the forest being cut down, too. The red trail led me back to the road where I had began the trail, and from there it was easy to walk back to the manor’s parking lot.

There are two trails in Bergvik, the red one is 3,2 kilometers long and the green one 4,7 kilometers. I walked the red trail counterclockwise, and the direction doesn’t matter as there are many hills to both directions.

How to get there: Bergvik is easiest to reach by car or bicycle.

Accessibility: The trail is not accessible for all. It is narrow and has many hills. The nature trail can be used freely and there is no need to book accommodation or contact the manor before going to the trail.

Facilities: The lean-to shelter and an outhouse are located along the nature trail. There is no firewood available at the lean-to shelter, but you can get some by contacting the Bergvik Manor. Remember that you can only use the fireplace when there is no forest fire warning on. I did not tour the manor or its premises.

When to go: I recommend visiting this area from summer to autumn.

What to wear: Normal sneakers will suffice, but there are some muddy parts along the trail. The rocks might get slippery when wet.

Aneriojärvi is a small lake in Suomusjärvi in Salo municipality close to Kruusila. There is a birdwatching tower overlooking the lake, and a short distance away you can find a huge 10-meter high boulder called Hermolanvaha. This area is known for Suomusjärvi culture, which existed in the Stone Age between 8400 and 5100 BC.