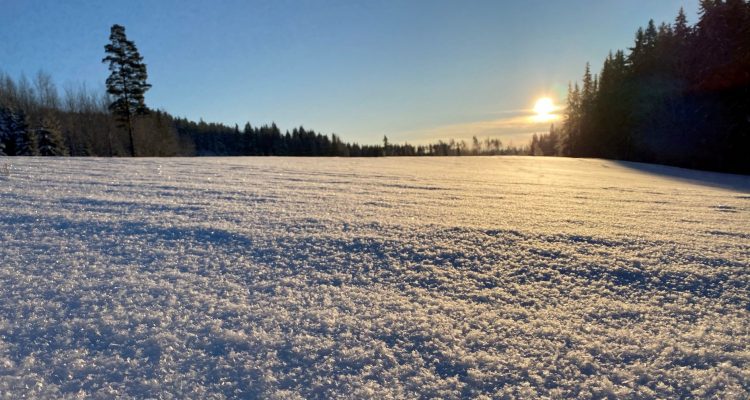 Snow in Finland is beautiful to look at and cold to touch, but what else do we know about snow? For us humans it often means slippery conditions in traffic, fun winter sports, or just beautiful time of the year. For the nature it means so much more.

I walk my dog daily and he loves sniffing the ground. In winter I get to actually see what he smells, when I see all kinds of traces in the snow. It helps me see a glimpse of his world.

We have learned as kids that snow flakes are all different shapes. We have cut snow flakes from silk paper and taped them to windows. All of our snow flakes were unique. It’s the same reason why snow insulates so well. One kilogram of snow consists of millions of snow flakes. Snow is mostly air, because there is approximately 90% air trapped between the snow flakes’ ice crystals. Because the air doesn’t conduct heat well, the fresh snow insulates very well. When snow begans to melt, it loses its insulation qualities. And that is why it also feels cold to the touch.

The snow coverage is essential for many plants growing in Finland. It protects them from drying. Trees migth be more prone to fall down in heavy winds if there is no snow on the ground.

The snow can also provide a warm shelter to animals. For example, all forest fowls in Finland spent hours sleeping in the snow. They remain close to the surface as it’s important to be able to fly away quickly, but the snow still provides cover and warmth for the birds. That is their way of surviving the cold winter in Finland.

The snow can protect many animals in Finland because their fur or feathers turn to white. Mountain hares, least weasels, and ermines are white in winter and thus quite well-protected as long as there is snow on the ground. Same goes for extremely rare and endangered arctic fox. Willow ptarmigan and rock ptarmigan living in Lapland are actually the only birds in Europe, which are seasonally camouflaged.

Animals change their coats for the winter when daylight hours are getting shorter. Global warming of the arctic region is therefore fateful for these animals as the climate change means the snow comes later and melts sooner. The animals are not able to adapt as quickly and you can easily spot white hares on the dark ground. White color obviously makes them much easier prey for wolves, foxes, or northern goshawks.

Many birds and even some mammals store food for the winter, but warmer winter means less snow and more rainy weather, which easily destroys their storages. In the northern hemisphere the snow coverage has decreased by 25 days within the last 50 years. We are already witnessing a drastic change of species that nest in Finland rather than migrating to the south. Occassional cold periods may become fatal for them.

When do we have snow in Finland?

According to the Finnish Meteorological Institute, snow cover arrives at different times in different parts of the country. In Lapland the winter is long and the permanent snow cover comes significantly earlier than in southern Finland. In Lapland the permanent snow cover comes usually in late October. In southern parts of the country we are known to have snowless winters, too. The spring arrives in April-May. Finland is beautiful during all four seasons, but if you want to experience proper winter, the best time to visit Lapland is from December to March.