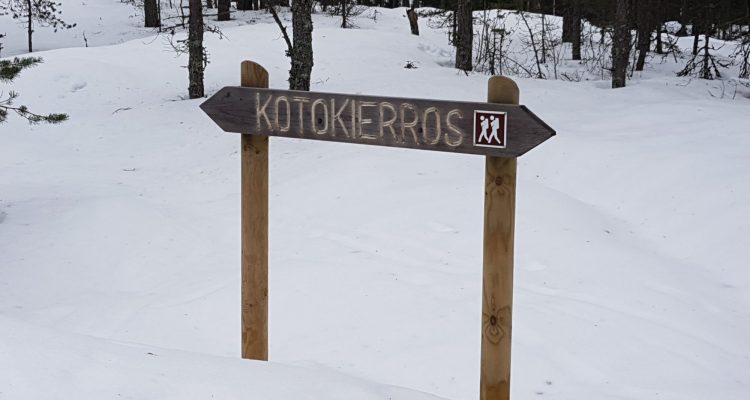 If you are looking for versatile outdoor opportunities in the capital region, but want an alternative to the often crowded Nuuksio area, the Meiko recreation area in Kirkkonummi is something for you. It has three marked routes, but is also very accessible for off-track activities, such as berry picking or even snowshoeing!

The starting point for the tracks is the parking lot next to the water pumping station, located a few kilometres from the centre of Kirkkonummi. I took the Kotokierros, marked with green on the map, with my dog a week ago. The 4,4 kilometre route is amazing in many ways. If you walk counter-clockwise, the path starts with a small waterfall and steep stairs that take you up on higher ground. The path then follows the stream into a thicker forest. Tip: If you like great views from above, deviate from the path here and head right 200 metres or so.

The main path continues to the first pond/lake, Kotolampi, with good spots for a break on the East side. Kotokierros is also known as the “five-pond tour”. The second pond is called Mustjärvi, and the view from the cliff on its East side is magnificent. You can easily imagine being further North in Finland. (Here’s some drone footage from my earlier trip in the area). The terrain can be a bit tricky here with rocks and elevations, especially in slippery conditions, so sturdy shoes are recommended!

This location also marks the northernmost borderline of the so-called Porkkala Parenthesis area, when large areas of Kirkkonummi, Siuntio and Inkoo were leased to the Soviet Union in 1944-56. Some bunkers from that time can still be found in the area, and the former border is still visible on satellite images. You can read more about this period for example on the Degerby village website.

From Mustjärvi the trail turns back toward the last three ponds, Kakarlampi (watch out for the soft swamps next to it), Immerlampi (perfect spot for breaks on the Eastern side) and finally Korsolampi. The latter is good for a shorter tour on an unmarked path around it. One of the disadvantages of the Meiko area is the lack of official campfire places. One of only two is located on the Southern side of Korsolampi.

If you want to double the distance, you can choose the yellow Meikonkierros, an 8,4 km walk around Lake Meiko. The trail takes you first Northeast of Lake Meiko, a few hundred metres from the parking lot. The cliffs here are very popular amongst swimmers. The cliffs on the Southern side offer spectacular views down to the lake. Halfway, on the Western side of the lake, you will find an unofficial campfire spot. (Note: pitching tents and making fires outside designated spots in the area is prohibited. Officially.) The Northern shores of the lake are more monotonous and even all the way back to the starting point. There are many good spots for day picknicks and swimming. The second official campfire spot in the area can be found on a small peninsula on the Northen side of the lake.

Finally there’s the shortest trail, Kuikankierros, marked red. It follows the shores of the Näseudden-peninsula at Lake Meiko. Totalling 3,2 kilometres, the trail is perfect for quick tour in the area.

The possibilities are not limited to these three trails. You can of course combine these for one longer walk, but there are also many umarked tracks that lead to for example Lake Vaipo in the South and the lakes Lappträsk and Långträsk in the West.

The rocks in the area make it a destination for rock climbers as well. The first rocks can be seen North of the parking area, but there’s a designated climbing spot a few hundred metres to the West.

The Meiko area has become more popular over the years and some improvements have been made. The trails have been improved and marked. The campfire spot at Korsolampi has also seen a facelift. However, possibilities for tenting is somewhat limited.

How to get there

The parking area of the Meiko wilderness area is situated a few kilometres North-West from Kirkkonummi. If you have a navigator, you can use the address Korsolammentie 44.

Public transport takes you to the Kirkkonummi centre (trains and buses from Helsinki). Check timetables from the Capital area Routeplanner.

Cycling to the area is popular, and in fact the trails are quite popular amongst mountain bikers.