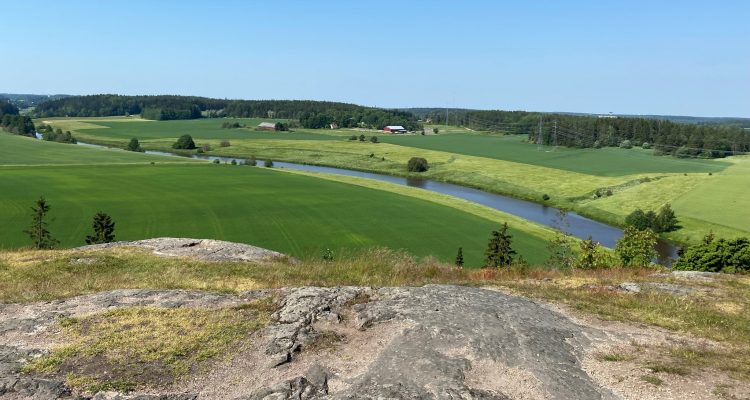 Vanhalinna in Lieto is an ancient castle site in Finland with Stone Age artefacts found on the hill. The hill rises 55 meters above the sea level and provides stunning views to all directions. It is also known as Linnavuori. You can enjoy short nature trails in the area, have a cup of coffee in Vanhalinna manor’s summer terrazas, visit the museum on site, or pet summer sheeps in the yard. Guess which one was my dog Nalle’s favourite thing?

We headed to Lieto very early in the morning as the day was going to be hot (+30 degrees Celcius) and I wanted to have a little walk with Nalle before it became too hot for him. Along Härkätie Ox Road leading to the manor, you can spot an ancient spring called Kuninkaanlähde, King’s spring. It is said to be used by King Gustav Vasa for his horses. So, if you come to Vanhalinna by a horse, this is the nearest gas station.

We drove pass the manor and parked the car near the sheep pasture. Nalle was interested in the sheep, but I wanted to take him for a walk first. We walked around the hill on Vanhalinna nature trail. The trail descented to the river, and there we found a little sauna cabin and a small deck squeezed on the hillside. It was getting warm and I was thankful for the shadows that the hill and trees provided. Massive spiderwebs on one tree made me feel like we stepped back in time.

It was then time to climb up the stairs and go check out the view from the top. The stairs are accessed through this cute stone gate on the manor’s yard. A step through the gate was like another step back in time.

Along the stairs there were few signs about ancient sea levels. Those helped me imagine how different the scenery has been, when most of the area has been covered by water. Lieto has been one of the best locations for archeologists in Finland, and the Vanhalinna Manor was donated by Mauno and Ester Wanhalinna in 1956 to University of Turku for archeological research. It’s not the oldest settlement area in Finland as Lieto was either covered by water or at least in outer archipelago during Suomusjärvi culture. The Suomusjärvi culture existed in the Stone Age between 8400 and 5100 BC, when Finland was being freed from the ice and emerging land areas were being colonised.

At the top, we enjoyed the views. There are no castle ruins anymore, but the hill alone is impressive. According to excavations, the castle has been in use in the Late Bronze Age and in middle Iron Age. There are some artefacts dated back to 500-800 A.D., and some from the 11th to 14th century. Some arrow heads that have been found are estimated to be connected to 1318 when Novgorod attacked Aurajokilaakso settlements. Vanhalinna wasn’t used after the 14th century when Turku and Turku castle became the main market area.

Nalle was excited to go see the sheep, but I didn’t allow him to scare them. He was behaving well, so I allowed him to go closer to the pasture. He approached them carefully as he was curious, but a bit scared. Who knew the sheep are so big! It was a lovely and peaceful encounter, that certainly made Nalle’s day.

Accessibility: Only the manor yard is accessible, and suitable for children’s prams. Nature trails and stairs up the hill are not accessible. I do not recommend allowing small kids walk freely at the top of the Linnavuori hill.

When to visit: Summer is the best time to visit the area, the sheep are here only for a short period.

Special to know: The area has a voluntary entrance fee, 5€ or other suitable amount, to be paid by mobile pay or account transfer. There are several signs with payment details in the area. That money is used to upkeep of the site. Normally they would fund that with events.